PETALING JAYA: One of Pang Cheh Chang’s proudest moments as a national coach was in guiding Tan Boon Heong-Hoon Thien How into world junior boys’ doubles champions 16 years ago in Canada.

Now that the 46-year-old has returned to handle the national junior squad again, he aims to replicate the feat in the mixed doubles at the World Junior Championships in Auckland from Jan 11-24 next year.

He has named Mohd Haikal Nazri-Low Yeen Yuan as the pair with the potential to win the title.

Cheh Chang said he was eager to make the most of an extra three months to beef up the world No. 17 combination as the world junior meet, which was initially slated for October, has been deferred to January.

Teamed up since last year, Haikal-Yeen Yuan have showed plenty of promise when they emerged as the runners-up at the German Junior Open and reached the last four of Dutch Junior Open in February.

“Based on their performance in Germany and Holland early this year, Haikal and Yeen Yuan certainly did well to stand out,” said Cheh Chang.

“But there are still few areas that they are still lacking, especially skills and anticipation on the frontcourt.

“If we can improve on these areas, then I believe that they will have a better chance of contending for the title at the worlds.

“The postponement has given me more time to work with them.

“I’m also testing on a few other combinations as we’re aiming to build two strong pairs.”

At last year’s meet in Kazan, Russia, Haikal-Yeen Yuan made it to the last 16.

Having a reliable mixed doubles combination at their disposal will surely give Malaysia the edge too in the mixed team event.

Last year, top junior mixed pair Yap Roy King-Gan Jing Err failed to rise to the occasion when it mattered most when they lost in the crucial fifth deciding tie. Malaysia then went down 3-2 to Hong Kong in the group stage and failed to reach the quarter-finals for the first time in history.

This resulted in them losing five quotas in the individual competitions for the Auckland edition. Seven coaches in seven years – but Tan has no mixed feelings 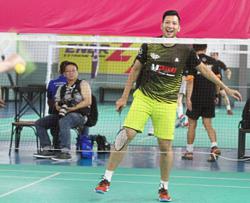 Hafiz wants Misbun legacy to go on with right mindset