For Aaron, the fight is on again

But that’s only as things are now. With the new Olympics dates set for one year on, anything could change.

The 23-year-old Aaron’s only thoughts now are that he and Wooi Yok remain in the qualifiers list.

Aaron is expecting the Badminton World Federation (BWF) to extend the original one-year qualifying period, now suspended due to the Covid-19 pandemic, when the international circuit resumes later this year.

The BWF are in the midst of reviewing the existing qualification system that was to have concluded on April 30.

Although they are now in a solid ninth spot in the Race to Tokyo rankings ahead of Goh V Shem-Tan Wee Kiong (14th) and Ong Yew Sin-Teo Ee Yi (15th), Aaron is taking nothing for granted.

As things stands, Aaron-Wooi Yik will earn the nod to represent the country in Tokyo next year.

The only way for Malaysia to secure the maximum two tickets is for both pairs to finish in the top eight.

“It’s certainly great news that the Olympics have been moved to next year, but we’re not going to think so far ahead on things like our medal target. The fact is: we haven’t even qualified yet, ” said the All-England finalist.

“The race is not over until we cross the finish line.

“Following the Olympics postponement, there’s a strong possibility that the qualifying period will be extended.

“I believe we will all probably continue from where we left off after the All-England, so we may have to see out five to six tournaments that could not take place in March and April.

“I’m personally in support of the qualifying period to be extended, that’s the only way to be fair to everyone.”

Aaron said he was anticipating a strong challenge from his former national teammates when the Race to Tokyo is back on.

“Knowing that they still have a chance to qualify, I’m sure V Shem-Wee Kiong and Yew Sin-Ee Yi will be more pumped up than ever, ” said Aaron.

“They are going to come back strongly, so we can’t take our current position for granted.” 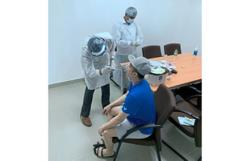 No ruthless training by Hendrawan from the start