PETALING JAYA: The Badminton World Federation (BWF) have kept their promise and frozen the world rankings indefinitely starting yesterday, a decision which will come as a relief for shuttlers around the world.

All the ranking lists have been paused after the March 17 updates, following the completion of the All-England on March 15.

The freezing of rankings was put in place to protect the players’ interest following the unprecedented suspension of the international circuit from March 16 to April 30 due to the Covid-19 outbreak.

With the deadly pandemic showing no signs of tapering any time soon, BWF believe the suspension could now last longer.

“At present, it is difficult to predict when the next international tournament will take place with more tournaments expected to be suspended in May and June, ” said BWF in a statement yesterday.

“The freezing of rankings will be backdated to Week 12, which is the week following the last international tournament that was played – the All England Open 2020.”

The world rankings are important to players as it determines their eligibility to participate in a tournament, as well as their seedings.

A top 32 player or pair will be able to gain access into tournaments of all-tiers.

“The ranking lists issued on March 17 will serve as a basis for entry and seeding into the next international tournaments – although it is difficult to say at this stage when this may be, ” explained the statement further.

“BWF will provide more information in due course regarding the process as to how the rankings will eventually be ‘unfrozen’ following the commencement of the international circuit.”

The freezing of world rankings, however, will have no impact on the separate Race to Tokyo rankings, which determines the list of qualifiers for the Tokyo Olympics.

BWF said they would announce later the changes in the Olympic qualification system which is currently under review following the postponement of the Tokyo Olympics to July 23-Aug 8 next year.

BWF made it clear that the review could take up to “several weeks”.

“BWF will now also initiate a review process to confirm any impacts on the Olympic qualification system, ” said the statement.

“Please note that the consequences of freezing the World Rankings will not apply to the Olympic qualification system, ” said the statement.

“This review process is expected to take several weeks upon which BWF will make a further announcement once all circumstances have been carefully considered.” 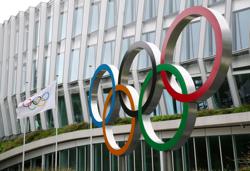