Shevon defers exams to focus on test at Bukit Jalil 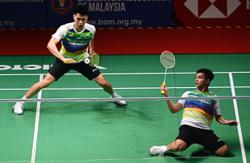 KUALA LUMPUR: Mixed doubles shuttler Shevon Lai Jemie has to postpone one test to get set for another at the Malaysian Masters.

The 25-year-old final year Sports Science degree student from Universiti Malaya has deferred her final examinations to give full focus on getting her campaign off to a good start in the home tournament, along with Goh Soon Huat.

The meet starts on Tuesday at the Axiata Arena in Bukit Jalil.

“I wanted badly to get over my final exams but it has to wait now. The priority is the Malaysian Masters, ” said Shevon.

Shevon’s commitment to the sport is understandable. She and Soon Huat are in the running to qualify for the Tokyo Olympic Games.

Both pairs can make it to the Olympics if they remain in the top eight until the end of the qualification period in April.

“It would be great if both pairs can make it but our situation is quite tricky. There is a chance to qualify and I want to go for it, ” said Shevon.

Shevon-Soon Huat face an acid test against world No. 13 China’s He Jiting-Du Yue in the opening match of the Masters.

Although the Malaysians are ranked higher, results against the Chinese pair do not favour them.

“We have lost four times and won twice. It’s a tough opener but we need to do well to gain good Olympics ranking points, ” she added.

Meanwhile, Peng Soon, who has recovered from Bell’s Palsy, will team up with Goh Liu Ying at the home tournament to face qualifiers in the opening round.

Malaysia’s third ranked pair of Tan Kian Meng-Lai Pei Jing are also in the main draw and they face Ricky Karandasuwardi-Pia Zebadiah Bernadet of Indonesia, whom they have beaten in their only meeting in the quarter-finals of the Singapore Open last year.