Looking for the next Chong Wei 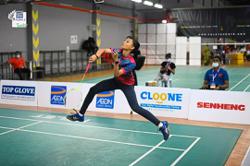 THEY may be brothers but Tan Zhi Shen and Tan Zhi Yang are rivals as well as partners on the badminton court.

The pair of non-identical twins emerged winner in the boy’s double Under-12 category at the Penang Olympic Carnival 2019.

The elder twin Zhi Shen also won the boy’s single Under-12, beating his brother who retired after trailing 21-10, 15-10 in the final.

The duo from SJK(C) Phei Sin in Bukit Dumbar, Penang, said they trained every day and hoped to enrol into the Bukit Jalil Sports School in the near future.

“Sometimes, we talk about badminton but we do fight at times,” Zhi Yang said jokingly.

Although Oo Shan Zi is only 12, she aims to become an Olympic champion by 25.

The Form One schoolgirl from SJK(C) Union in Burma Road said she has been training since she was nine.

“I train every day and sometimes for more than five hours a day.

“It was my father who discovered my talent and sent me for badminton lessons,” she said.

Shan Zi bagged the Under-12 girl’s single and girl’s double in the recent championship.

As for Ooi Swee Khoon, 35, it was a hard-fought match between him and his 45-year-old opponent Ng Kam Fook.

“Since I am a badminton coach at the OSK Badminton Academy, I teach and train almost every day for at least two hours,” Ooi said, adding that he had participated in both national and international tournaments during his younger days.

Ooi, the champion in the men’s single Open and mixed double Open categories, added that he is hoping to discover more new talented players to represent Malaysia in future badminton tournaments.

He added that the competition was an ideal platform to spot local talents.

“With the parents’ and coaches’ support, we can discover talented players who could be the next Datuk Lee Chong Wei who retired recently.

“Penang is a state that is well known for producing top-class athletes and I hope that a Penangite will win the first badminton gold medal for Malaysia in the 2020 Olympics,” he said.

Batu Uban assemblyman A. Kumaresan said there were 779 participants who took part in 14 different categories in the badminton tournament at the MBPP Relau Sports Complex in Bayan Lepas.