Misbun: It’ll take another 10-15 years to produce a gem like LCW

KUALA LUMPUR: Producing the next Lee Chong Wei is a daunting task indeed.

Not even Datuk Misbun Sidek – the man who discovered Chong Wei and turned him into one of the greatest shuttlers of all time – can guarantee he can churn out another Chong Wei within a short period of time.

And the national men’s singles head coach even claims it could take up to 10 to 15 years before Malaysia can produce an extraordinary player like Chong Wei again.

“We don’t have to think too far ahead,” said the 59-year-old Misbun, who guided Chong Wei to the first of the three Olympic silver medals he won (Beijing 2008).

“If we’re able to bring up top players like Rashid Sidek and Wong Choong Hann, it’s also good enough as these calibre players are capable of winning Superseries events on a regular basis.”

Misbun’s assessment not only applies to the local players as he reckons that even the current cream of the crop have yet to reach the benchmark set by Chong Wei and other greats of the same generation.

“You need to be playing at 95% of your ability to be an exceptionally top player. Most of the men’s singles shuttlers can only perform at 85% to 90%,” claimed Misbun.

“Even Kento Momota, Chen Long and Chou Tien-chen are playing at just 92%.

“In my opinion, only four players belong to that 95% group. They are Chong Wei, Lin Dan, Taufik Hidayat and Peter-Gade Christensen.

“But the reason why the current players are struggling is probably due to the hectic tournament schedule, and also the the highly-intense style of play.”

“I was sad and happy at the same time. Sad, because he had finally called it a day after representing Malaysia for so long,” he said.

“He has come a long way to become the world No .1. He’s one of the world’s greatest. It was very fulfilling because that’s part of my dream too.

“And I’m happy because he was able to battle through his deadly illness. It pleases me to see him getting better and better, and almost back to his normal life again.”

Misbun was not present during Chong Wei’s special press conference to announce his retirement on Thursday but he revealed that the icon had visited him last Monday to inform him about his intention to retire.

“It was a very emotional meeting. Chong Wei expressed his gratitude, and I thanked him too in return because if it wasn’t him (his success), then I’m just nobody,” he recalled.

“Our relationship is far more than just coach and player, we’re like father and son, a family.

“We had a heart-to-heart conversation for about 20 minutes, we were both very emotional,” said Misbun, choking with emotion. 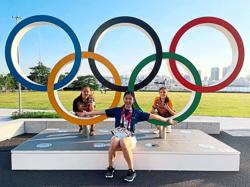