1992 once more as Cup heroes gather in reunion

PETALING JAYA: It has been 27 years since they lifted the Thomas Cup at Stadium Negara – a feat that united the nation.

In 1992, Malaysia defeated arch-rivals Indonesia 3-2 to win the prestigious men’s team tournament for the fifth time.

Jalani Sidek was the only absentee.

The occasion was made more memorable with the presence of the Prime Minister’s wife, Tun Dr Siti Hasmah Mohamad Ali, who was the patron of the Badminton Association of Malaysia (BAM) then in 1992.

Tun Siti Hasmah came up with the idea of having the reunion.

“Believe it or not, this is our official reunion since we won the Thomas Cup in 1992!” exclaimed Razif.

“Some of us still get in touch with each other or meet up during events but this is the first time we had a proper gathering.

“Tun Siti Hasmah raised the idea two or three years ago. It’s not easy to get everyone together.

“We have Soon Kit to thank for it. He made all the arrangements and kept us updated via WhatsApp.

“For us it feels more like a family reunion. I haven’t seen Beng Kiang and Kok Keong in ages.”

Razif said they intend to hold another gathering which will include members of the 1994 squad that emerged runners-up in Jakarta.

Among the shuttlers then were Ong Ewe Hock, Yap Kim Hock and Tan Kim Her.

“Tun Siti Hasmah is also eager to catch up with them. She was at the Istora Senayan when we lost to Indonesia (3-0).”

Razif also paid tribute to the late Tan Sri Elyas Omar, then BAM president in 1992 and the late Datuk Punch Gunalan, who was the team manager.

The 1992 triumph marked the last time Malaysia tasted success in the biennial tournament. 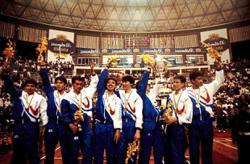