Shevon the battle with determination and the right partner

NATIONAL mixed doubles ace Shevon Lai Jemie once harboured thoughts of hanging up her racquet.The 25-year-old had previously paired up with Wong Fai Yin and the late Tan Chee Tean but those partnerships failed to take off until she partnered Goh Soon Huat.

The pair are currently the world No. 9 and the second highest ranked in the country behind Chan Peng Soon-Goh Liu Ying.

They made waves last month when they reached the semi-finals of the German Open and All-England.

And hopes are high for them to continue their fine form at the Malaysia Open when it gets underway at the Axiata Arena today.

Shevon confessed that they have come a long way and paid tribute to former Badminton Association of Malaysia technical director Morten Frost as the man who turned things around for them.

“I never expected to reach this level in the beginning,” said Shevon.

“A lot of times I just wanted to give up as I had lost faith in the sport. I was on the verge of calling it quits when Frost told me that I have yet to realise my true potential.

“I’ve got to thank him for believing in us. Soon Huat was also not doing well in the singles back then.”

Their partnership in 2016 flourished almost immediately when they bagged back-to-back victories at the Malaysian International Challenge and Scottish Open.

Soon Huat-Shevon will be out to make amends in the Malaysia Open after their first-round exit last year.

If they get past Indonesia’s Alfian Eko Prasetya-Marsheilla Gischa Islami in the opening round, they are likely to face Thailand’s Dechapol Puavaranukroh-Sapsiree Taeratta-nachai, whom they have not beaten in the last two meetings.

Peng Soon-Liu Ying should beat Japan’s Kohei Gondo-Ayane Kurihara in their opener and go on to set up a last-eight clash with world No. 2 Wang Yilyu-Huang Dongping of China. 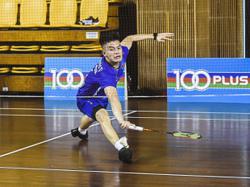