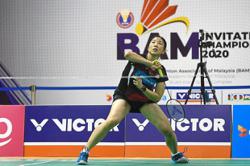 The 35-year-old has withdrawn from the World Championships in Nanjing, which begins next Monday, and the Asiad in Indonesia from Aug 18-Sept 2 due to health issues.

In a statement yesterday, the Badminton Association of Malaysia (BAM) said the world No. 2 is suffering from a respiratory problem.

“We regret to announce that Lee Chong Wei has informed BAM that he is unwell and suffering from a respiratory related disorder,” said the statement.

“His doctor has advised him to rest and undergo treatment. For the time being, he cannot undergo any intensive physical activity for a period of at least one month and therefore we have to withdraw Chong Wei from his participation at the BWF World Championships and the Asian Games.”

Earlier, Chong Wei’s participation in the two major tournaments had been thrown into doubt after he was absent from training since last Monday.

His mysterious no-show had raised eyebrows especially with him returning to form recently.

And buoyed by his resounding performance, he immediately declared his intention to compete until the 2020 Tokyo Olympics.

The following week, he did well to reach the semi-finals of the Indonesian Open before his run was halted by the 24-year-old Momota.

It was initially thought that he suffered from burn out after the back-to-back highly competitive tournaments but it turned out that he was suffering from illness.

“BAM understands the concern surrounding the absence of Chong Wei at the Akademi Badminton Malaysia (ABM) this past week,” added the statement.

“During this period of recovery, we ask the public and the media to respect the privacy of Chong Wei and his family. We pray for his speedy recovery and look forward to welcoming him back at the ABM.”

The world crown and Asiad gold are among the major titles, besides the Olympics, that are missing from his illustrious 17-year international career.

The Asiad gold is surely out of question for Chong Wei as he has made it clear that the Indonesian Games will be his swansong.

Chong Wei has made no secret that the quadrennial Asiad is his top priority, compared to the world meet where he could still play in Basel, Switzerland, next year.

He is the silver medallist at the Guangzhou Games in 2010 and twice bronze medallist in 2014 Incheon and 2006 Doha Games. He also claimed two team bronzes in Incheon and Doha.

In his absence, Malaysia’s hopes of contending for their first gold since 2006 have been severely affected.

As for the world meet, Chong Wei is still seeking for an elusive world title after three runners-up finishes in 2011, 2013 and 2015.

In Nanjing, Chong Wei was supposed to meet Frenchman Brice Leverdez in the first round, the man who slayed him at the same stage in Glasgow last year.

No show from Chong Wei fuels speculation on participation in Nanjing, Asian Games