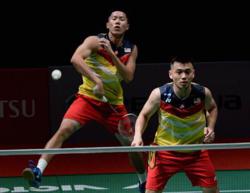 PETALING JAYA: Men’s doubles shuttler Tan Wee Kiong will be playing with an extra spring in his steps at the Denmark Open in Odense from Oct 18-23.

The 27-year-old Wee Kiong broke the hearts of his adoring legion of female fans when he married 28-year-old beautician Chia Shi Leng on Wednesday.

Wee Kiong’s fan base expanded tremendously after he won the men’s doubles silver medal with Goh V Shem at the Rio Olympics in August.

“We had set this date even before the Olympics. I’ve known her since we began playing badminton together in Johor, but became close seven years ago,” said Wee Kiong.

“We registered our marriage today and we’ll have our wedding dinner at a later date as I’m always travelling for tournaments.

“I’m also focused on training, but she has been faithful, supportive and accommodating.

“So, I will be more than motivated to do well at the Denmark Open. A good showing will surely make her happy.”

Wee Kiong also has another reason to do well in Denmark as he and V Shem have moved up two spots to No. 7 in the world rankings.

“This is the highest we have reached in the world. Hopefully, we will move up further with better showing in Denmark,” said Wee Kiong.

The US$700,000 Denmark Open is the eighth leg of the Superseries Tour this season. There are three stops remaining – in France, China and Hong Kong.

Only the top eight pairs after the 12-leg Tour will get to compete in the BWF World Superseries in Dubai, the United Arab Emirates, from Dec 14-12.

V Shem-Wee Kiong are in second spot of the Superseries rankings.

Having failed to reach any of the finals of the Superseries so far this year, the duo will be hoping for better luck in Odense.

“V Shem and I have been quite focused on our training despite having to juggle with other personal commitments. We’re looking forward to a good showing in Odense,” said Wee Kiong, who reached the semi-finals of the Korean Open in Seoul with V Shem last month.