Chong Wei Feing attempts to return a shot during his match against Philippines Jayson Oba-Ob at the Britama Arena in Jakarta on Tuesday. Wei Feng 21-12, 21-14 and delivered the first point

KUALA LUMPUR: Chong Wei Feng is disappointed with the Badminton Association of Malaysia (BAM) for scuppering his dream of playing in the Olympics.

The SEA Games men’s singles champion thought he was a shoo-in to play in the Asia Team Championships in Hyderabad from Feb 15-21.

“I had wanted to play at the Thailand Open (Feb 8-13 in Bangkok) to get some Olympic points but I was told that players preparing for the Thomas Cup qualifiers cannot go for back-to-back tournaments. Now, I am out of both the tournaments,” said Wei Feng.

“They are sending the men’s doubles players (Goh V Shem-Tan Wee Kiong) to Thailand but not the singles players. I told the BAM that I was willing to pay my own trip to Bangkok, but it was shot down,” he added.

Wei Feng is now ranked 41st in the world and time is running out for him. He has to finish in the top 16 to qualify for the Olympics in Rio de Janeiro in August.

Wei Feng said it was important for him to play in a team event – a requisite to qualifying for the Olympics – and had hoped to play in Hyderabad.

“(Lee) Chong Wei and V Shem-Wee Kiong took part in the Sudirman Cup last year, so they have fulfilled the quota of playing in one team event. I have not,” he said.

Wei Feng also lamented on being left out of the World Championships in Indonesia last year.

“I qualified for the World Championships on merit but I was not sent. I lost a good opportunity to collect valuable Olympic ranking points. I was told that I would be sent for other tournaments,” said the 28-year-old.

Instead, Wei Feng was told to play in the Singapore SEA Games in June. He won the gold, but not the ranking points.

“I am disappointed with the BAM. I have been quiet all this while. I have been too kind for too long. I am down right now but life goes on.”

Wei Feng said he would try to give his best shot in the Malaysian Masters at the SPICE Arena in Relau, Penang, on Wednesday.

“I still have a few tournaments before the Olympic qualifying period ends (in April). I will have to fight for myself,” said Wei Feng, who will face second seed K. Srikanth of India in the first round. 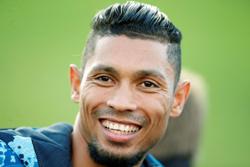