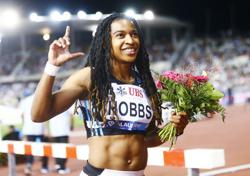 OLYMPIC champion Elaine Thompson-Herah rocketed to a sprint double at the Commonwealth Games as Australia pulled clear of England at the top of the medals table.

The Jamaican sprint star, 30, was the headline act on the penultimate night of track and field competition in Birmingham and did not disappoint the capacity crowd, destroying the field to win the women’s 200m in a Games record of 22.02s.

“I’m grateful to claim that gold today, the day we celebrate Independence Day in Jamaica.”

Thompson-Herah topped the podium at last year’s Tokyo Olympics in both the 100m and 200m, retaining the titles she had won in Rio four years earlier.

But she only took bronze in the 100m behind compatriots Shelly-Ann Fraser-Pryce and Shericka Jackson at last month’s world championships and finished seventh in the 200m final.

“I knew I had more races to come. I’m not a quitter,” said Thompson-Herah of her disappointing world championships results.

“It’s a motivation for me to continue to learn and just keep going.”

Thompson-Herah, who won the 100m earlier in the Games, faced a tough task on paper in the 200m final despite the absence of her Jamaican rivals.

But she finished nearly half a second ahead of Nigeria’s Favour Ofili, with Namibia’s Olympic silver medallist Christine Mboma taking bronze.

Trinidad and Tobago’s Jereem Richards won the men’s 200m in a Games record time of 19.80.

“But with 200 to go, I closed the gap and then I knew I had to push myself right until the end.”

Uganda’s Jacob Kiplimo outbattled Kenyan pair Nicholas Kipkorir Kimeli and Jacob Krop down the home straight to win the 5,000m in a season’s best time of 13:8.08, completing a distance double in Birmingham after his earlier 10,000m win.

“It was a wonderful performance for me (at the Games),” he said. “I have two (gold medals) and I’m so happy about it.”

Alastair Chalmers won Guernsey’s first ever track and field medal when he took bronze in the men’s 400m hurdles.

The 25-year-old produced a storming late finish to cross the line in 3:30.12, breaking a 48-year-old Games record.

Australia won two golds on the last night of action in the diving pool, in the women’s synchronised 3m springboard and the synchronised 10m platform.

England swept the podium in the men’s 3m springboard but Jack Laugher missed out on a third gold in Birmingham after a disappointing penultimate dive, being forced to settle for bronze.

Hot favourites Australia beat New Zealand by five wickets in their women’s Twenty20 semi-final cricket clash at Edgbaston to set up a gold medal match against India, who edged England by four runs in a thriller.

England were also beaten in the netball semi-finals by Australia, who will meet Jamaica in the final. — AFP

India beat South Africa 3-2 in the men’s hockey semi-finals and will play Australia in Monday’s gold medal match after the six-time defending champions beat England by the same scoreline.

The bowls competition wrapped up on Saturday, with Australia taking two of the final three golds on offer, in the women’s pairs and the men’s singles. — AFP