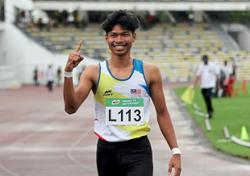 SPRINTER Russel Alexander Nasir Taib will take back plenty of experience after failing to reach the 200m final.

The 24-year-old could only finish sixth in heat one with a time of 21.32s, which was slower than the time he recorded in the heats.

The Australia-based Russel was visibly disappointed that he did not improve on his personal best of 20.77s, which is also the national record.

England’s Zharnel Hughes turned on the thrusters to finish first with a time of 20.32s.

“I could have done better, at least sub 21 and close to my personal best to progress,” he said.

“I was not able to match the Olympians and world-class competitors. I’ve not competed over the last few months and it was not easy to build the momentum.

“I’ve learnt a lot from this experience. I need to process what happened and work with my coach to be ready when the Australian domestic season starts in October.”

Russel acknowledged the improved quality of sprint events in Malaysia, especially with the emergence of young speed demons like Mohd Azeem Fahmi, who broke the national record in the 100m with a time of 10.09s in the heats of the World Junior Championships in Cali, Colombia.

“It’s great for Malaysian athletics to have new talents coming up. It’s certainly a huge development,” said Russel, who hopes to team up with Azeem in one of the future races. 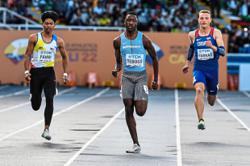