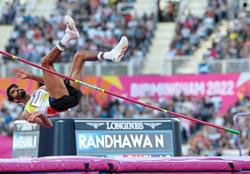 KUALA LUMPUR: The Malaysian Athletics Federation (MAF) have set a target for four of their athletes to advance to the finals of their respective events at the Birmingham Commonwealth Games.

Other track and field athletes who will also be competing at the Games in Birmingham from July 28-Aug 8 are sprinter Russel Alexander Nasir Taib (men’s 200m), Jackie Wong (men’s hammer) and Grace Wong (women’s hammer).

Shahidan also announced the appointment of Perlis Athletics Association secretary M. Iyaru as the manager of the athletics camp for Birmingham 2022.

National head coach Manshahar Abdul Jalil said Nauraj had the prospect of finishing in the top five at Birmingham if he could match his season-best record of 2.27m (indoor) or his national record of 2.30m.“If he can do 2.30m, there may also be an opportunity to bring back a medal. Irfan has a chance to finish 10th-12th with his best throw of 61.61m recorded in Germany last month as there are over five challengers who can throw over 65m.

“For Shereen, to win a medal, she needs to record a time of under 51 seconds, but for now, her best record is 52.68s. So even if you are in the semi-final group, I think it’s good enough, and reaching the final is better,” he added. — Bernama

Athletics-Coach Minichiello banned for life over inappropriate conduct
Athletics-London Stadium to host Diamond League meeting in 2023
Nauraj clears the air about ankle injury
Triple jump blow for triple A
Montag inspired by Holocaust-surviving grandmother
Thompson-Herah seals sprint double after worlds flop
Nothing for Russel to crow about, but experience will be invaluable
Disappointing day for Jackie
Athletics-Poland's Andrejczyk to miss rest of season with shoulder injury
No medals no problem, personal bests will do just fine