KINGSTON (Reuters) - Shericka Jackson ran the third fastest 200 metres of all time in 21.55 seconds to seal a sprint double at the Jamaican national trials for next month's World Championships on Sunday.

The 27-year-old led coming off the corner and pulled clear down the straight to add the 200m crown to the 100m title she won on Friday. Elaine Thompson-Herah finished second in 22.05 with Shelly-Ann Fraser-Pryce third in 22.14.

Only the late Florence Griffith Joyner, who set her long-standing world record of 21.34 seconds in 1988, and compatriot Thompson-Herah, who clocked 21.53 to seal the sprint double at last year's Tokyo Olympics, have run faster.

Asked whether she had expected to post such a quick time, Jackson told Reuters: "Honestly no! I did not expect to go this fast."

Jackson, who won bronze in the 100m in Tokyo, was not completely satisfied with her performance.

"For the next three weeks we (coach Paul Francis and I) will clean up any mistakes I made and I expect greater things," she added.

In the men's 110m hurdles, Olympic champion Hansle Parchment recovered from a sluggish start to catch Omar McLeod and pull away to win in 13.14.

"I am always trying to focus on maintaining my technique because I feel like a lot of people might get flustered in the race, as they go along, so I maintain that focus to give me an edge," Parchment told Reuters.

Rasheed Broadbell took second in 13.20 while Orlando Bennett was third with 13.28.

Fast-starting McLeod, the 2016 Olympic and 2017 world champion, hit a hurdle and struggled home in last place.

Britany Anderson lived up to her status as favourite in the women's 100m hurdles, crossing the line in 12.53 ahead of Tokyo bronze medallist Megan Tapper (12.60) and Danielle Williams (12.66).

"A personal best was definitely on my mind, but because of the rain, everything just got messed up, but I refocused and made the team," Anderson told Reuters.

Earlier, Navasky Anderson battled through the pouring rain to win the men's 800m in 1 minute, 48.53, while Chrisann Gordon-Powell denied Natoya Goule a ninth title in the women's race.

(Reporting by Kayon Raynor in Kingston; Editing by Peter Rutherford) 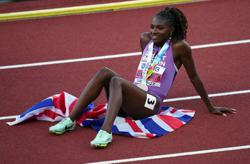