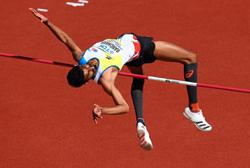 PETALING JAYA: SEA Games gold medallist Andre Anura Anuar (pic) shows he is getting into the groove for next month’s Commonwealth Games after topping the triple jump event in the Perak Open yesterday.

The 23-year-old Andre took the gold with a jump of 15.19m, ahead of Perak’s Mohd Shah Sholihin Azhar who gave a tough fight with a distance of 15.16m at the Perak Stadium in Ipoh.

Last month, Andre registered a personal best of 16.51m to win the triple jump gold at the SEA Games in Hanoi.

He is one of the athletes selected under the athletics quota for the Commonwealth Games in Birmingham from July 28-Aug 8.