Target met, but are we on track?

Is the five-gold feat a success in athletics?

THE target was five gold medals and it was achieved – but was it a success?

That is the question that has to be asked to our Malaysia’s athletics squad as the track athletes turned out to be a disappointment.

To be sure, the field athletes turned out to be a joy to watch, especially young pole vaulter Nor Sarah Adi. She was only supposed to compete in the 4x100m relay, but was signed up for the pole vault event.

Making her debut in the event, she not only broke her personal best of 3.60m by reaching 4m in Hanoi, but also went on to win the gold.

The 21-year-old revealed that she last took part in a pole vault event a year ago.

She is now likely to focus more on the pole vault and see how far – or how high – she can go in the upcoming months.

Coached by former pole vaulter Roslinda Samsu, Sarah could well reach for her mentor’s national record of 4.40m. But first, she hopes to break the SEA Games record of 4.25m held by the Philippines’ Natalie Uy in Cambodia next year.

“I believe with the guidance of my coach, it can happen,” Sarah said.

Another athlete who surprised was Andre Anura Anuar, who won the triple jump gold by leaping to 16.51m, his new personal best.

That is good news for Malaysia who now have both Andre and Hakimi Ismail for the event in Cambodia.

Hakimi missed the Hanoi Games due to injury but will be back more motivated knowing that the 22-year-old Andre is closing in on his record of 16.77m.

Andre, however, finished a disappointing fifth in long jump despite holding the national record of 8.02m. He will be out to make amends in Cambodia.

“That’s the aim for sure. I just got to keep working harder to ensure Malaysia remains the best in the jump events,” said Andre.

Jackie, who spent two months in hospital in 2020 due to Covid-19, was happy to return to action after dealing with the pandemic and also a concussion last year, so the 66.49m he recorded was special to him.

Irfan (58.26m) and Grace (57.30m) weren’t too happy with their attempts, but it was still good enough for a gold. Both have also vowed to come back stronger in Cambodia.

The big disappointment in the field events would be that Nauraj Singh Randhawa, who was unable to keep the high jump gold medal in Malaysia, finishing second on 2.18m.

With his training in Europe, he had been confident of doing much better but said the experience had humbled him. The 30-year-old has now set his sights on the Commonwealth Games in Birmingham.

Another top female athlete Queenie Ting Kung Ni, also achieved her target, but with a twinge of regret that it was not the discus gold.

In her fifth throw, the 24-year-old Sarawakian hurled to a distance of 52.36m, breaking her personal best and national record of 50.67m but it was only good for silver.

Despite the heartening efforts in the field event, the track athletes flopped badly.

In the blue riband 100m, Mohd Azeem Fahmi failed to even qualify for the final, while Mohd Arsyad Mohd Saat finished sixth with a time of 10.69 seconds.

Arsyad suffered a pulled hamstring after competing in heat one but still decided to run in the final but the 20-year-old could not keep up.

Azeem, who had been tagged as the “Malaysian Bolt”, had been the big hope but his bid was scuppered by a false start. He apologised but it did not help.

Malaysia failed to make it a hattrick of 100m wins at the Games.

Instead, 16-year-old Thai wonderkid Puripol Boonson emerged as the fastest man in the region with a time of 10.44, while teammate Soraoat Dapbang (10.56) grabbed silver. Singapore’s Marc Louis (10.56) took home the bronze in a photo finish.

“He is disappointed but he is only 18. He will have many more SEA Games to prove himself,” Manshahar said.

Middle-distance runner K. Prabudass never got to the track as he fell ill and spent all of the Games in hospital. He had been a gold medal prospect in the 1,500m and 5,000m.

The men’s 4x100 relay team of Arsyad, Azeem, Zulfiqar Ismail and Mohd Haiqal Hanapi brought some consolation when they broke the national record of 39.27 by clocking 39.09 to win silver.

Heptathlete Norliyana Kamaruddin also broke her national and personal best with 5,262, surpassing her 5,247 mark recorded five years ago in the Kuala Lumpur SEA Games but she had to settle for bronze.

Malaysia, however, need more than personal bests and national records to make any headway in the SEA Games as the rivals, with greater development, are now reaching Asian, if not world, class.

The country has a lot to do to catch up and be a respected athletics nation again. 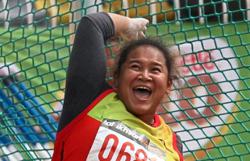