Singh is not king as Nauraj stumbles

IT was a day to forget for Malaysian athletes at the My Dinh Stadium, especially for national high jumper Nauraj Singh Randhawa.

But he stumbled at 2.21m. Confident that he could atone for it, he decided to go for 2.23m. And failed in both his attempts.

Thailand’s Kobsit Sittichai who cleared 2.21m took the gold while Nauraj had to settle for silver.

Another Malaysian, Mohd Eizlan Dahalan, secured bronze with a personal best of 2.18m.

What made it painful was that Malaysia had won high jump gold at every Games since 1977, except in 2005.

Germany-based Nauraj said the defeat was a humbling experience but one that would give him the impetus to bounce back.

“I do not know what I am feeling now. I walked in here with every intention to win. I know how the game is. Winning and losing is part of being an athlete,” he said.

“Losing at this stage doesn’t often happen to me. It’s a hard pill to swallow, but I accept it and I salute my opponent who did well to clear 2.21m.

“If I walk in here daring to win, I must also accept defeat. The second placing is still an achievement.

Nauraj revealed that he couldn’t do two weeks of proper technical training due to fitness issues.

“This is my first outdoor competition since August last year. There are many contributing factors as well, but I am not going to stand here making excuses.”

Meanwhile, Eizlan was glad that he could break his personal best.

He has now set his sights on bettering that mark, hopefully in the Cambodia SEA Games next year.

“Everything felt good today, even in the warm-up, I felt like I could break my personal best of 2.15m, which was recorded last year.

“The work starts now, and I know seniors like Nauraj will be able to help me do well.”

(Note: Nauraj claimed the silver after the clearing the height earlier) 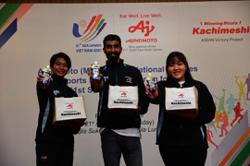 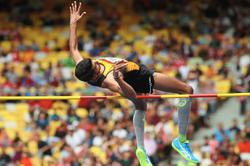