KUALA LUMPUR: Mohd Irfan Shamsuddin (pic) is eager to make a name for himself in the region.The discus thrower is eyeing a maiden medal at the Asian Games in Hangzhou, China, scheduled in September next year.

Irfan said it was time to shine on the Asian stage after dominating South-East Asia following his multiple success of winning SEA Games golds starting from the 2013 edition in Myanmar until 2019 in the Philippines.

Although the Asiad is his top priority next year, the Negri Sembilan athlete added that he will not relinquish his title at the next SEA Games in Hanoi (May).

“Of course I want to defend the gold and do my best at the SEA Games because it is part of the journey to become an Asian Games medallist,” he said.

Meanwhile, the national record holder with a throw of 62.55m, urged the Malaysian Athletics Federation (MAF) to seek funds from large companies for the survival of their athletes.

Irfan said MAF should play an important role in finding their own funds following news that the National Sports Council (NSC) would face budget cuts next year.

“I mean NSC have to take care of a lot of athletes, if they don’t have the budget then MAF need to do a little bit of work to find sponsors,” he added.

Irfan also hoped that MAF and NSC can reach an agreement to help him reunite with coach Frantisek Petrovic, whose contract was terminated in 2019.

It is understood that Petrovic is currently handling Sarawak athletes. — Bernama 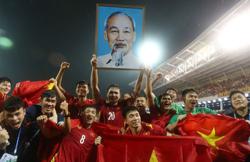