TORONTO (Reuters) - Damian Warner may have won decathlon gold at the Tokyo Olympics in record-setting fashion but the Canadian is far from satisfied and is already plotting a course he hopes will land him in an elite club of repeat champions.

Warner took over two months off since his Tokyo triumph and resumes training on Friday to mark the start of a journey to the 2024 Paris Games where he hopes to become only the fourth man to successfully defend an Olympic decathlon title.

"There are still some more things that I want to accomplish in the sport," Warner told Reuters in a telephone interview.

"This past year on and off the track has just been really special to me and I am looking forward to building on it over the next three years."

Warner reached the pinnacle of his sport in Tokyo where he led the men's decathlon from start to finish with an Olympic record score of 9,018 points.

But in some ways, Warner is still chasing Tokyo silver medallist Kevin Mayer given the Frenchman set the current world record in decathlon with 9,126 points in September 2018.

"For me the decathlon is like a giant, crazy impossible puzzle that I keep trying to solve," said Warner.

"From a technical standpoint there are a lot of events I can still improve on. From an accomplishment standpoint I still haven't won a world championship gold medal, that's the only title I haven't achieved, but also the decathlon world record.

The 31-year-old Warner, who has teamed up with Kraft Heinz Canada to help draw attention to food insecurity ahead of World Food Day on Saturday, will not have to wait long to make a run at the decathlon world record.

Warner's competition schedule for 2022 will revolve around the March 11-13 world indoor championships in Belgrade, Serbia, the May 28-29 Hypo-Meeting in Gotzis, Austria, and the July 15-24 world championships in Eugene, Oregon.

Like many other athletes, Warner's build-up to the Tokyo Games was far from ideal as the COVID-19 outbreak brought competition to a halt and resulted in the closure of the facility where he trained.

Undeterred, Warner used an unheated ice hockey arena that was converted into a multi-events facility to prepare for Tokyo and believes the adjustments made during the pandemic will go a long way toward his Paris goals.

"There are a lot of things we learned during this process with COVID that we can apply to the years moving forward, especially with me being an older athlete," said Warner.

"The lessons we learned about not overtraining and keeping yourself healthy throughout the season and how we can structure training around that will definitely play a role leading up to Paris so I can stay healthy and be able to compete at my best." 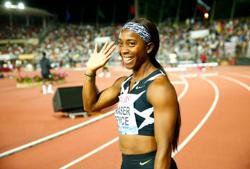 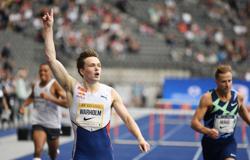