TOKYO: Elaine Thompson-Herah (pic) sets out to follow up her Olympic 100m gold medal in the 200m today with the athletics world wondering how much faster she can run.

The 29-year-old Jamaican sprint queen stormed to victory in the 100m on Saturday, eclipsing Florence Griffith Joyner’s 33-year-old Olympic record by 0.01 second with a time of 10.61.

The win left Thompson-Herah firmly on course to repeat her 2016 Rio Olympics 100m-200m sprint double, for what would be an unprecedented women’s “double-double”.

The victory also left hanging the question of how much Thompson-Herah has left in the tank – and whether more records might be within reach.

Thompson-Herah would almost certainly have clocked a faster time on Saturday had she not started celebrating well before the finish line, potentially edging her closer to Griffith Joyner’s 100m world record of 12.49, long regarded as untouchable.

Now Thompson-Herah is training her sights on today’s opening heats in the 200m, where the Olympic and world record remains Griffith Joyner’s 21.34, set at the drug-tainted 1988 Seoul Games.

To threaten that, Thompson-Herah would need to significantly improve her 200m personal best of 21.66, set in Beijing in 2015.

Yet after her 100m win on Saturday, Thompson-Herah says as far as her future is concerned, “anything is possible”.

Asked if she believed Griffith Joyner’s 100m world record was attainable, she replied: “Most definitely.”

“I think I could have gone faster if I wasn’t pointing and celebrating early,” she said.

“I wanted to show there was more in store. Hopefully one day I can unleash that time.”

Thompson-Herah admitted that she had surprised even herself with her performances in Tokyo so far. — AFP 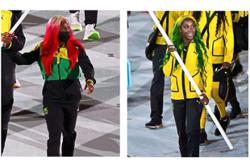 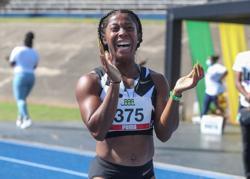