The 33-year-old Rayzam has been having doubts about his performance after a long season without tournaments and is hoping to regain his form at the Qosanov Memorial in Almaty, Kazakhstan on June 19.

"I need to restore my confidence as I've been away from the limelight for far too long due to the Covid-19 pandemic," said Rayzam.

"In 15 months, the stint in Almaty will only be my second. I hope to build my confidence with a good result."

In his first competition this year, he posted a poor time of 14.50s en route to winning gold in the 110m hurdles at the Malaysian Grand Prix in Bukit Jalil.

The Sabahan hopes to go below 14 seconds in Almaty and beat the SEA Games qualifying mark of 14.20s.


"I want to improve my time and win a gold in Hanoi SEA Games. At my age, I have to make use of every opportunity given." 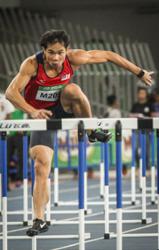