KUALA LUMPUR: A total of 60 athletes will compete in the Malaysian Grand Prix Championship at the National Sports Council Mini Stadium in Bukit Jalil from April 10-11.

“This event received the green light of the Ministry of Youth and Sports last week and will be organised according to the standard operating procedure set, ” he said.

“It will also serve as a selection venue for athletes to represent the country at the Hanoi SEA Games from Nov 21 to Dec 2.

“Hopefully, this is good news to the athletes. We hope that they can respond to the challenge by giving their best in this championship after having been out of competition for such a long time.”

The last time the national athletes competed against each other was at the National Sports Council carnival in December last year.

Except for the Germany-based high jumper Nauraj Singh Randhawa and discus thrower Muhammad Irfan Shamsuddin, the rest of the national athletes are training in Bukit Jalil. —Bernama. 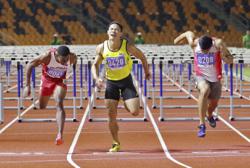