PETALING JAYA: With most sports at a standstill due to Covid-19, athletes are finding creative ways in pursuit of an adrenaline rush.

For Malaysian tower runner Soh Wai Ching, he took a step further and is now the world record holder after breaking the Guinness World Record’s (GWR) “Greatest Vertical Height Stair Climbing in One Hour” challenge at the Four Seasons Hotel in Kuala Lumpur on Wednesday.

He comfortably broke the 1.227km record set by Spaniard David Robles Tapia in Zaragoza last year. However the result of Soh’s attempt is currently being studied by Guinness World Records officials who explained through a video call that it might take up to to two days for the official results to be out.

“We are going through the footage(of Soh’s attempt) and it will take two days to get the results out because we will have to analyse the footage in detail and it is a long video, ” Guinness World Records official adjudicator Swapnil Dangarikar explained.

The attempt, which was made possible with sports science support from the National Sports Institute, will be ratified in two days time by the GWR.

In the run, Wai Ching made his way to the 66th floor of the building and then took the elevator to the ground floor before running to the top again repeatedly from 9pm to 10pm.

Tower running is a sport which involves running up tall man-made structures.

Usually, the race will take place on the internal staircases of skyscrapers but it can also cover any foot race which involves a course that ascends a man-made structure.

“As a professional athlete, we all train hard, compete and give our best to perform well and win races, ” said Wai Ching.

Even when the nation started to be put under movement control order (MCO) since March, Wai Ching continued to train at home in Selayang daily. He was doing up to 3,000 chair push-ups a day to prepare for this challenge.

“Because of the current situation there are no races in the near future. We just cannot continue to train all day without any challenges ahead of us.

“We have to think outside of the box. Besides promoting Malaysia to the world, I have always wanted to try to get my name inside the GWR book.

“I hope to get more people take up tower running and at the same time raise funds for the Malaysia Tower Running Association, ” added Wai Ching, who is ranked No. 1 in Asia. 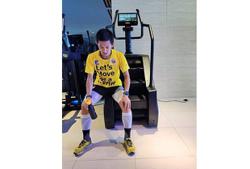 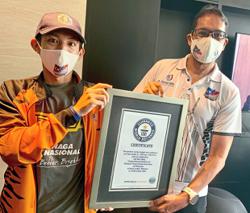