KUALA LUMPUR: The postponement of the Malaysia Games (Sukma) has given junior sprinter Mohd Fakhrul Abdul Aziz (pic) a new lease of life.

Many thought that his young athletics career was over after he aggravated a hamstring injury during the Perak All-Comers in Ipoh in February, but the former Penang Free School student now has time to recover.

Sukma, scheduled in July, has been moved to March next year.

The 19-year-old hopes to forget about his miserable 2020 and start afresh.

“Luckily the Sukma has been postponed. It’ll give me enough time to recover and come back stronger. I hope for a better year for me in competitions, ” said Fakhrul.

Fakhrul’s career began on a bright note when he posted a personal best of 10.59 en route to winning gold in the boys’ Under-18 100m event at the National Schools Sports Council (MSSM) in Penang in 2017 but injuries had slowed him down.

His struggles started since he suffered a right thigh injury for the first time during the Asean School Games in Kuala Lumpur in 2018.

Despite the injury, he featured in the Perak Sukma in September the same year, clocking a poor time of 11.18 in the semi-finals.

A month later, he took part in the Youth Olympics Games in Buenos Aires and posted 10.73 in the semi-finals.

“I started well. After my MSSM success in Penang, I also did well to clock 10.62 to retain gold in the MSSM meet in Shah Alam the following year, ” he said.

“Everything was looking good but I kept getting hamstring injuries. It has affected my performance in competitions in the last two years.

“I struggled to get close to my personal best but hopefully, it will all change for the better.” 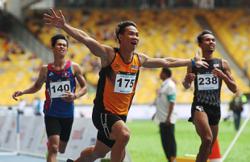 No hurdle too high for Farhan in bid to be No. 1 Shahreem jumps at chance to clash with Andre at Sukma