No going home, Jonathan sticks to training at varsity

PETALING JAYA: Most students from local higher education institutions who had been stuck in their hostels since March 18, have gone home after permission was granted on April 27. Not Jonathan Nyepa.

The national sprinter is staying put in his campus in Universiti Putra Malaysia (UPM) in Serdang to continue with his training.

Jonathan, who is doing a degree in Human Resource Development, said he was used to not returning home and is willing to forgo the Gawai celebration with his family on June 1-2.

“I rarely go back to my village since becoming a national athlete because of my training and tournament commitments. In previous years, I only returned to the village once for Christmas, so this is not an issue for me, ” said Jonathan, who is from Sungai Asap, Belaga.

“My village is in the green zone, and I will need to be quarantined first before I can go home... I have applied to return, just in case, because we don’t know when the universities will reopen. For the time being, I feel it’s best for me to stay in campus and focus on training.

“There are not many people in the campus and no outsiders are allowed, so it’s safe to train. “

“I have been training consistently since the movement control order (MCO) was implemented and the training is based on body weight and endurance. The MCO has been relaxed so I have been doing some hill running inside the campus as well, ” said Nyepa.

“I will continue to train although all athletics events have been postponed or cancelled throughout the world. Like everyone else, I can’t do much beside focusing on improving myself.” 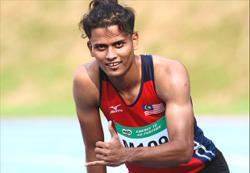