FILE PHOTO: The Olympic rings are pictured at dusk through a steel fence, at the waterfront area of the Odaiba Marine Park, after the postponing of the Olympic Games Tokyo 2020, due to the outbreak of coronavirus disease (COVID 19), in Tokyo, Japan March 25, 2020. REUTERS/Issei Kato/File Photo

The IOC and Japanese government succumbed to intense pressure from athletes and sporting bodies around the world last week by agreeing to postpone the Games by a year to 2021 because of the coronavirus pandemic.

Some 57% of the 11,000 athletes had already qualified for the Tokyo Games this year before qualification tournaments were scrapped as the virus spread in recent months.

Those athletes, the IOC said, would keep their qualification but would need to be re-selected for next year by their National Olympic Committee again as they represented a nation and not themselves.

"All of the qualifications that have been achieved by National Olympic Committees and individual athletes remain in place," IOC Sports director Kit McConnell said in a conference call.

"Any athlete needs to be individually selected because they represent their NOC. In all sports the NOC retains the right to select the athletes."

McConnell said the IOC was also in talks with world soccer's governing body FIFA to decide on the tournament next year, as only players aged under 23 are allowed to compete apart from a limited number of over-age players per team.

In many cases footballers will be above the age limit next year although having qualified this year.

"In several sports there are specific age regulations, minimum or maximum, for health safety or to provide an age group as in men's football with under-23."

"We are in discussions with FIFA... We have to finalise that in the coming weeks."

The IOC is also efforting to make the athletes' village available again after it was planned to be sold off as apartments after this year's Games.

"The village is the home away from home, a fantastic development. It is one of the very first tasks to re-secure this fantastic property. Yes, it is absolutely on that urgency list".

Dubi said those first priority venues, including the dozens of sports venues, convention sites and thousands of hotel rooms, would need to be re-secured quickly.

"All of this has to be re-secured for one year later," Dubi said. "It is a massive undertaking to get back to fundamentals." He added that the IOC planned to have finalised talks for those "priority" locations in a matter of weeks. 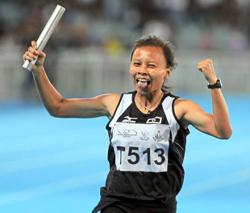 Plain sailing in Langkawi as squad of 24 check in