A treble in the triple jump

NATIONAL triple jumper Mohd Hakimi Ismail is the undisputed triple jump champion of South-East Asia. He proved it by taking the gold medal for a third time at the New Clark City Athletics Arena. And it was all the more meaningful because this was his first win in any event so far this year.

After having won in Singapore 2015 and Kuala Lumpur 2017, he dedicated his third win to his wife Sharifah Mastiara Syed Mahadi who is expecting their second child next month.

The 28-year-old leapt to a season best of 16.68m ahead of the Philippines’ Mark Harry Diones who managed 16.42m. Indonesia’s long jump gold medallist Sapwatur-rahman came in third with 16.21m. National long jumper Andre Anura Anuar was fifth on 16.00m.

Hakimi’s jump was just short of his national record of 16.77m which he set in KL 2017. Still, he was delighted with his effort and showed it with a fist pump as he stepped out of the pit.

“It’s my third gold but really the most special thing about this medal is that this is for my family, especially my wife who is now eight months pregnant, ” said Hakimi.

“The baby is due in January and this medal is really for her. She has sacrificed so much for me by taking care of our first son while being pregnant as I pursue my passion in athletics.”

For Hakimi, it was also a great end to a bad year as he has failed to win anything this year until yesterday.

“It has been a very difficult season for me and this is the best jump of the season.

“Today, everyone had the same potential and all I did was just try my best.

“Somehow, things go well for me at the SEA Games.”

With another gold in the bag, Hakimi said he has no intention of stopping any time soon.

“I had actually thought of quitting but now I will keep on going for as long as I can.” 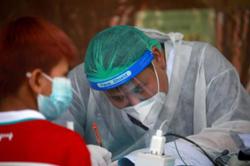