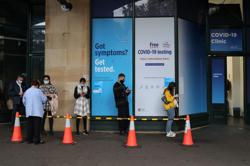 The athlete from Johor, who went to Australia in January, broke the national record to emerge victorious in the Singapore Open Athletics Championships at the National Stadium on Thursday – and qualify for the Rio de Janeiro Olympics in August.

The 24-year-old Nauraj soared to a personal best of 2.29m to better the eight-year national record by two centimetres and equal the Rio Olympics qualifying mark.

A proud moment for Nauraj Singh

The previous national record of 2.27m was set by Lee Hup Wei in the China Open in 2008. He went on to qualify for the Beijing Olympics.

Only seven athletes took part in the men’s high jump event in Singapore and Noor Shafie Mohamed made it a one-two for Malaysia by winning the silver after clearing 2.09m.

Lin Thin of Myanmar cleared 2.03m for the bronze.

And he coolly cleared it.

Nauraj, who returned from Australia on April 17, has been training without a coach.

Alim Ahmejanov, who has been training him for the last eight years, has returned to Uzbekistan for good.

But it did not matter as Nauraj said that he knew he was capable of doing a personal best after his three-month stint in Australia.

Nauraj in action during the high jump event

“I’m physically in good shape and I must thank coach Alex (Stewart), who helped me improve on my techniques and also build up my confidence level,” said Nauraj.

“I made steady progress in Australia and won all four competitions I took part in.

“I learned of lot of from Alex and the Singapore Open has to be the best outing of my career,” added Nauraj, who is majoring in exercise science at Universiti Malaya.

Nauraj also said that he would request the National Sports Council (NSC) and the Malaysian Athletics Federation (MAF) to send him for another training stint in Australia to prepare for the Rio Olympics.

“Training under Alex will definitely help me to further improve on my personal best. I’m willing to skip my studies to train in Australia,” said Nauraj.