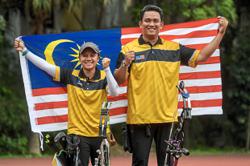 ARCHER Juwaidi Mazuki (pic) hopes to conquer Asia after sweeping a double in the compound events in Hanoi.

The 32-year-old got off to a slow start but once he had warmed up, there was no stopping him as he combined superbly with Fatin Nurfatehah Mat Salleh to beat the Philippines’ Jennifer Dy Chan-Paul Santos De La Cruz 151-150 for the mixed team gold.

Then, he nailed his first individual gold by beating Thailand’s Sirapop Chainak 147-142.

He was also a member of the team together with Alang Ariff Aqil Mohd Ghazali and Wong Co Wan who lost to Indonesia 229-230 in the gold medal playoff.

Naturally, he is aiming to do well in the Hangzhou Asian Games, which has been postponed to next year.

“For me, it was all about the hunger to win in Hanoi,” said Juwaidi.

“I know I equalled my record in the 2017 SEA Games (winning two golds) but this one feels special because I won the individual gold. Usually, I aim for the team event.“I hope to continue with the good showing in the Asian Games.

“The giants will be there but to face them, I will make sure to put my heart and soul in training.”

Juwaidi is hoping that the sport will be included in the next SEA Games in Cambodia as he intends to add to his Games medal tally of seven golds, three silvers and one bronze.

The recurve team flopped again after firing blanks at the last edition in Manila in 2019 too.

Syaqiera Mashayikh and Khairul Anuar Mohamad were the team’s best hope to land a gold in the mixed team final but they failed against Indonesia.

While Syaqiera is still young and has many good years ahead of her, Olympian Khairul needs to step up.

In only her first SEA Games, Syaqiera has won silver in the mixed team and bronze in the individual.

Khairul, who has won several gold medals in the Games, could not reproduce the same form in Vietnam. 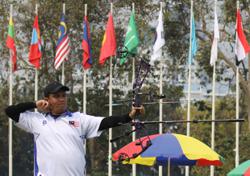 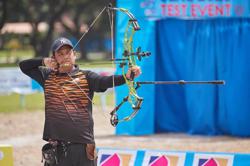