Take it as a team! 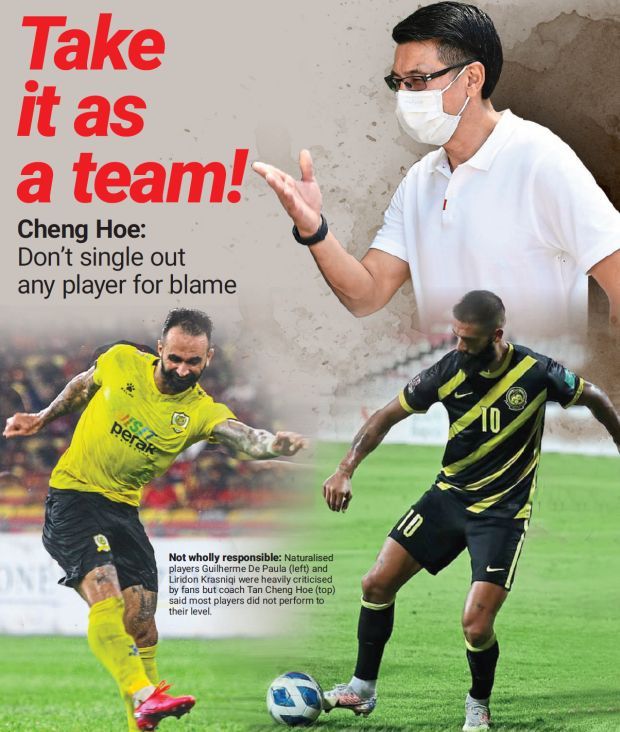 PETALING JAYA: It was a night to forget for Harimau Malaya.

Minds were fixated on avenging their 1-2 defeat against the United Arab Emirates two years ago in Kuala Lumpur but instead, a listless performance saw them sinking 0-4 in their Group G tie of the World Cup 2022-Asian Cup 2023 second-round qualifiers at the Zabeel Stadium in Dubai on Friday.

UAE’s ace striker Ali Mabhkout and creative playmaker Fabio Lima were the heroes as they scored a double each. Mabhkout scored in the 18th and 90th minutes, while Fabio scored in the 83rd and 95th.

Two years ago, Malaysia showed a real fight, but this time they were toothless even with the inclusion of naturalised players striker Guilherme De Paula and Liridon Krasniqi.

Under-fire Liridon and De Paula were criticised by fans, but national coach Tan Cheng Hoe said they should not be the only ones blamed as most players did not perform to their actual level.

“It is a disappointing result because of the huge scoreline. We lacked focus and confidence in ourselves. We collapsed towards the end. The second goal made us go all over the place. We did not play our usual game, ” said Cheng Hoe.

“We cannot blame one or two players. Most of them didn’t perform up to expectations. Only the defence did well, but that was up to the 80th minute.

“The morale of the team is down. No one wants to be in such a defeat.

“One has to understand that we have not played high-intensity games in a while, and UAE had really good preparations before the qualifiers.”

Cheng Hoe has urged his boys to bounce back against Vietnam on June 11.

“Just look forward now. We have to be really prepared for Vietnam because they are a side that play aggressive football and defend well too. The coaches will do their part to build team spirit.

“They know the last two games will be crucial if we want to get to the Asian Cup.”

Recent form would suggest that Vietnam will have the edge over Cheng Hoe’s men. In Malaysia’s last five meetings with Vietnam, they have lost four times and drawn once.

Malaysia have dropped to fourth in the standings with nine points, while the UAE, with a game in hand, have jumped to second, also with nine points but on better goal difference.

Vietnam remain top with 11 points, while Thailand - who drew 2-2 with Indonesia in the other group qualifier on Friday - are third, also with nine points and better goal difference compared to Malaysia.