By DAVINA GOH
WHEN I was in college, I developed a strong distaste for my own handwriting. It was sleek and modest at some parts, spiky and rebellious in others. To an extent, it robbed me of whatever little joy there was in studying for exams, and word had gotten round that the last person to borrow notes to copy from was yours truly. Often I wished that I could unlearn my handwriting and create a new style from scratch. Something I could be proud of, something pretty enough for people to heap praises on me for. Alas, my erratic scribbles remained a sad fixture throughout my student life. Up until recently, I realized that the only time I take a pen to paper is when I need to sign a document or credit card receipt. The only other event was penning a love letter to my better half. I had barely made it down two thirds of the page when I had to stop for my hand to rest. This alarmed me. Ten years ago, I was able to write page after page of lecture notes without stopping, save for a little shake of the wrist every now and then. How interesting it was to realize that the body has lost such an overlooked skill. Over time, I have found myself turning more and more to typing out my thoughts over writing them. I have succumbed to the lure of speed typing, of the convenience of bulleting over mind maps, of the Backspace button over eraser dirt. But whenever I do stumble upon a piece of paper which I had hastily jotted directions or messages for other people whilst over the phone, I pause over the anxious-looking cursive hybrid, the habitual misspellings, the accidental strokes across the 'l's and 'f's. The exclusivity of it, being legible only to me, would give me a trivial sense of satisfaction. 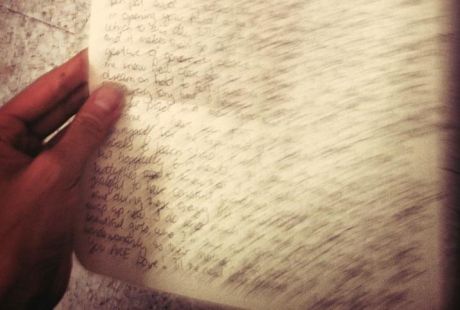 "ften I wished that I could unlearn my handwriting and create a new style from scratch."

A part of me is glad that I no longer need to be judged by my trainwreck handwriting, which people used to inevitably do. Another part of me wants them react to it, to marvel at the depth of its chaos, and how it could flow from a hand as polite as mine. It is ironic that graphology is considered a valid method of scrutinizing one's character, yet I have never seen the handwriting of any of my closest friends today - except for one best friend I've kept since college days. I have decided to entertain penmanship more frequently these days. For example, I have a friend called Abby, who I write to from every country I have visited for the past three years. The task of finding an appropriate postcard, a stamp and a postbox, and supporting the local postal service of some of the grittiest places I have been to, has been a stimulating addition to my travel agendas. In July this year, just two weeks short of flying to China for my kungfu studies, I fulfilled one of the most important things on my To-Do list. I picked up a pen, an aerogramme and a greeting card, and wrote to two penpals: Debbie, from the United States, and Michael, from South Africa. I randomly befriended them online about three years ago, and they have become dear friends since, even during my stint of limited connectivity in Myanmar. Gifts have been shared in the post, the last one from Michael being a canvas painting he did of one of my favorite photos I took in Myanmar. To this day, it baffles me how a gift so intimate and significant can be received from a person I have yet to meet! Regardless of how often one engages in it and how accurate the analyses may be, handwriting remains an inescapable extension of ourselves as a literate community. With the evolution of relatively impersonal correspondence via social media, there is something about reading words that someone took the time to personally address to you that makes you appreciate  their desire to share their lives with you. The ease of sending a text, email or Facebook comment have made many of us forget how equally easy it used to be to pick up a pencil and scrawl a secret message to a classmate two desks down, to leave a Post-it for your mom on the fridge, or to simply present our feelings in the most unique way that we as individuals possibly could. At the time of composing this article, my mother will be asked to open my bedroom drawer back home in Malaysia. She will find an envelope with her name on it. The last time I wrote a letter to her was in my teenage years, when I struggled to find an channel that allowed for more understanding between us. Now she will find a letter of acknowledgment and love and gratitude, and a wish for her to have a lovely birthday. I didn't know what to get her as a present before I left, but I hope that my words are valuable enough for now. The views expressed are entirely the writer's own
Article type: metered
User Type: anonymous web
User Status:
Campaign ID: 1
Cxense type: free
User access status: 3