From cubs to tigers

SOME falling down, some missing the ball completely, some imitating the signature moves of their favourite players … there is nothing cuter than watching kids strutting their stuff on a football pitch.

And then, of course, there are some other children who have the potential to become world-beaters. YouTube is filled with videos of these kids showing off their prowess and skills.

AC Milan youth team star Hachim Mastour was one of those kids whose videos had you wondering what kind of player he’d turn into. As it turns out, the now 16-year-old Italian looks to be well on his way to playing regularly in the Serie A. Skilful, adept with both feet and blessed with ability to open up defences, pundits are already gushing about his star quality.

Of course, like any Malaysian, what I really want is to see a local kid make the transition from prodigy to football star.

We do have many young and talented players. Unfortunately, for some reason or other, these kids’ talents tend to fade as they grow older.

Remember Titus James? Great things were expected of him but he is now, to paraphrase the Gotye song, just somebody that we used to know.

The hope, however, is that Youth and Sports Minister Khairy Jamaluddin’s brainchild  the National Football Development Programme (NFDP) will see things change in local football.

Spearheaded by ex-international and former Bayern Munich youth coach Lim Teong Kim, the NFDP, which was established in 2013, aims to put Malaysia on par with Asia’s best sides. 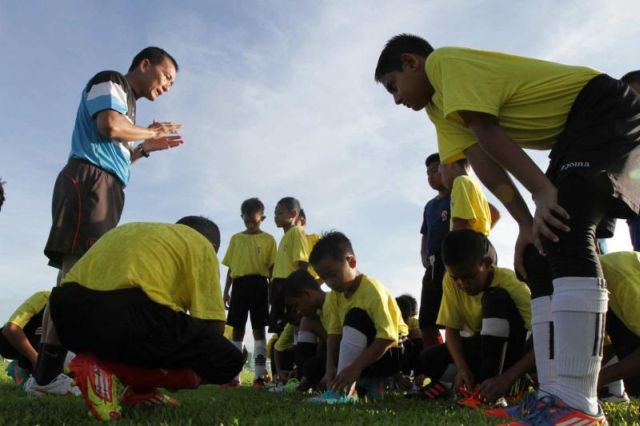 A structured coaching system has been beneficial to NFDP players.

“I am convinced we will be as good as the Japanese and Koreans, but we have to be patient.

“These are qualities that will separate the wheat from the chaff,” said Lim.

Khairy seems happy with the programme and has faith that Lim is the man to take the nation forward.

“The style of play, the DNA of football that the young kids in NFDP display in recent tournaments is fantastic.

“When you change the DNA through better coaching and a concerted and structured programme, you get good results,” said Khairy in an interview with The Star Online.

But what of the problem of transition to senior level and how daunting that process can be?

“I had a chat with Tengku Mahkota Pahang and told His Highness that we needed the transition from NFDP to FAM to be as smooth as possible.

“We do not want them to just excel in NFDP. It really happens to lots of players, they excel during their junior days but by the time they get to the senior squad, they just seem to underperform,” the minister said.

He added that the NFDP is also working with the Football Association of Malaysia (FAM) to establish a bridging league for youngsters to ensure they get regular games instead of warming the bench with state teams.

“I’m saying this because when 18-year-olds are absorbed into the states, they are not playing. They are kept as substitutes or they play in youth tournaments.

“Therefore the continuity and the intensity to play weekly is reduced. We spoke of a bridging league. Perhaps in the couple of years, we will have one,” said Khairy.

But the one point that really piqued was when the minister spoke of Malaysian players plying their trade overseas.

“The most important thing that was discussed between Lim and myself: targeting 50,000 players by 2020 and of the 50,000, 500 players will be selected to train at the Mokhtar Dahari Football Academy at Gambang in Kuantan, Pahang.

“Our ambition in Malaysia for these guys is to encourage them not to play here but to start thinking about playing overseas,” he said.

Khairy noted, however, that it is easier said than done because we have, in the past, sent players overseas and as he quipped “in a week, they come back because they can’t have nasi lemak”.

However, he said he has urged Lim to indoctrinate the NFDP players by telling them that success was to play abroad.

“With all due respect, playing in the Malaysian league will not help aid their development but to play in the J-League, or play in the competitive leagues in the Middle East, China or even in Europe, that will help them!

“That is the sort of KPI that Lim has to set to his kids. In their minds, some of these kids, they will say lepas saya main NFDP, saya nak main untuk JDT, Kelantan atau Pahang (After I play for NFDP, I want to join JDT, Kelantan or Pahang).

“With all due respect to these teams, I would like the national league to come up but in 10 years, it is not going to be the same as the J-League or the Premier league, we have to admit that,” Khairy said.

He said that many top European, Asian and South American sides have lots of their players playing overseas and the quality is there for all to see.

“We must convince (the players) that their success lies overseas. Come back and play for the national team but you hone your skills overseas,” he said.

We have many academies around the country but the way NFDP is being managed might just mean a bright future for Malaysian football.