The technical astuteness of Netherlands' Van Gaal meets the passion of Mexico's Herrera.

THE World Cup 2014 is now in the do-or-die stages for 16 teams. You lose and you board the plane home. So one can expect all the match-ups to be feisty. So far, Brazil and Colombia have qualified for the quarter-finals.

Two more spots for the quarter-finals are up for grabs in tonight's games, with Netherlands facing Mexico in the earlier kick-off, while Group D champions Costa Rica will face Euro 2004 champions Greece in the other second round match-up.

Both European teams will have a tricky task ahead facing these two Concacaf nations.

With Robin van Persie back in the fold, many fans will expect Netherlands to beat the Mexicans. However, Mexico, led by its animated coach Miguel Herrera, is one plucky side.

Herrera's antics aside, the man has put together a formidable Mexican squad and the team has looked impressive throughout the tournament.

With Guillermo Ochoa in goal, Rafael Marquez in defence, Hector Herrera in midfield and the hardworking Giovanni Dos Santos in attack, the Aztecas have been a joy to watch throughout the tournament.

Louis van Gaal is one of the best tacticians in world football as he proved during the group stages. If things do not go as planned, van Gaal is brave enough to alter his tactics mid-game, and his players seem capable of adpating.

Expect van Gaal to do the same against Mexico. Changing from 4-3-3 to 5-3-2 or 4-4-2 shows that the man has the tactical nous to outwit anyone. Arjen Robben's pace and Wesley Sneijder's vision will surely cause problems for the Mexican defence.

However, Dutch defence has looked suspect at times and they have to be on their toes when facing Dos Santos and Oribe Peralta.

It will be a highly-charged affair. Netherlands to nick this 3-2.

Costa Rica appears to have has the upper hand in this tie. Greece were lucky to qualify to the next round after disappointing in their first two group matches, but they shocked Ivory Coast in their final group game to proceed.

Under Fernando Santos, Greece's football is not pleasing to the eye and to have a lanky player like Giorgios Samaras playing on the left wing says it all!

Relying on veteran players like Theofanis Gekas, Kostas Katsouranis and Giorgios Karagounis helped them emerge from the group stage, but Greece will find the going tough against a vibrant and talented Costa Rica side.

Jose Luis Pinto is the most talked-about coach in this tournament, and he will surely want his boys to go as far as possible. He will surely stick with his favourite first eleven and expect all of them to contribute in today's game. 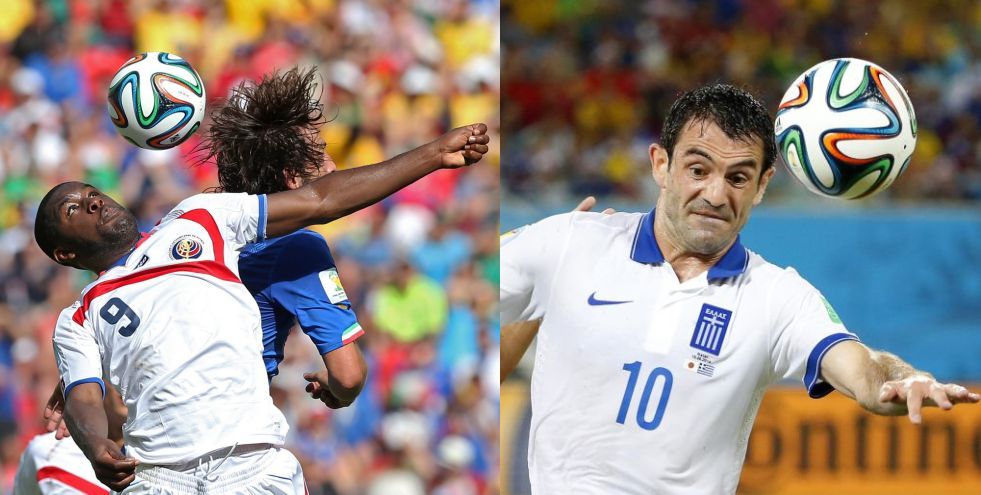 Costa Rica will have the youthful exuberance of Joel Campbell (left) and Greece will have to reply on experienced heads like Giorgios Karagounis.

Captain Bryan Ruiz, young sensation Joel Campbell and tricky midfielder Cristian Bolanos will be the key players for Costa Rica and expect them to cause problems for Sokratis Papasthopoulos and company.

Yeltsin Tejeda and Celso Borges will need to win their midfield battle against Katsouranis and Karagounis if they want to win this tie. This main battles for the match will surely take place in the midfield.

It looks like Costa Rica will continue their stellar run and go to the quarter-finals by beating Greece 2-0.