THE football season has just ended. Actually, it has yet to end! We have the UEFA Champions League final this Sunday and the FIFA World Cup in Brazil next month.

Team of the year They had to wait till the final game to win the La Liga. Defeating Barcelona at the majestic Nou Camp Stadium is the icing on the cake. It’s not easy to topple Barcelona at their fortress but Diego Godin’s equaliser was enough to seal the title for the Los Rojiblancos.

It was a closely contested title race but Diego Simeone’s side showed grit and resilience to trounce their opponents.

During pre-season, many pundits wrote off Atletico’s chances after they sold Radamel Falcao to cash rich side Ligue 1 AS Monaco and only brought in veteran Barcelona forward David Villa as a replacement. However, Atletico started the season well and were consistent throughout 2013-214.

Brazilian born Spanish striker Diego Costa scored 36 goals in 50 games in all competitions. His darting runs and ability to bully defenders is second to none! Jose Resureccion Merodio or better known as Koke resurrected Atletico with his assists and he has been a revelation for the talented side. The 22-year-old provided 16 assists throughout the season.

All of the players linked well and people will surely remember them for their fighting spirit. Atletico deserved their La Liga title and they will be hoping to complete their fairy tale season by beating their rivals Real Madrid in the UEFA Champions League final in Lisbon this Sunday.

Player of the year

He served his ‘sentence’ and came back strongly! He didn’t just score goals but he nearly helped Liverpool to win the title only for them to slip against Chelsea and Crystal Palace in the final stretch of the league.

He missed the first five games of the season due to his 10 match ban he received last year for biting Chelsea’s Branislav Ivanovic in a league match. He was subject to much transfer speculation but the Uruguayan stayed put and remained at Anfield.

Brendan Rodgers certainly benefitted from his presence. In 33 league games, the 27-year-old scored 31 goals and also top scored in the World Cup qualifiers with 11 goals in 13 games for Uruguay. Not to forget, he scored three goals in the Confederations Cup. Worthy candidate for the upcoming Ballon D’Or - You bet!

What a season he has had! Hattricks against West Bromwich Albion and Cardiff City and four goals against his favourite hunting side, Norwich, the Uruguayan was unstoppable. He made Liverpool believe they can win the title and fans will surely hope for him stay on for the next few seasons.

If he remains with Liverpool, I’m expecting him to shine in the Champions League. The buck-toothed striker has matured into a fine striker and he will be the main man for Uruguay in the World Cup if he recovers from his knee injury.

Young player of the year 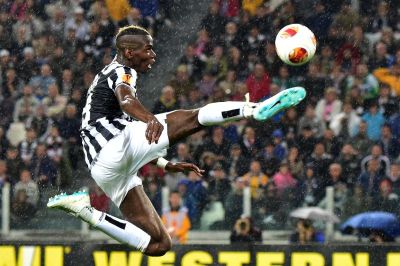 It was between Atletico Madrid’s Jorge Resureccion Merodio aka Koke and Paul Pogba. I had a tough time deciding who was the best. After watching highlights of these two players, I’ve decided to select Paul Pogba. Manchester United’s lost is Juventus’s gain. What a player he has grown into!

The combative midfielder helped Juventus to retain the Serie A title which is also their 30th title and this season the team collected a record of 102 points thanks to Pogba and his teammates.

Together with Carlos Tevez, Andrea Pirlo, Arturo Vidal and Giorgio Chiellini, they stole the headlines with their displays and Pogba particularly stole the show with his domineering performances as a defensive midfielder.

He can dribble, tackle, cross, intercept passes, play through passes, control the ball well, score goals and intimidate opponents - What more can you ask from a midfielder! See him shine in the years to come and teams will have to be wary of him!

Coach of the year

What a season he has had! Winning the La Liga and qualifying for the UEFA Champions League final is not an easy feat. Since 2011. he has won the UEFA Europa League and Copa Del Ray and he looks set to cement himself as one of Atletico Madrid’s best coaches.

This season is extra special for him as they won their first league title since 1996. As a player, Simeone won the title in 1996 and now, he has won the title as a coach!

The 44-year-old Argentinian will surely be eyed by top clubs in the near future. Just like his playing style, he instills fighting spirit into his players and his brand of football is attractive too. He has been credited for making players like Diego Costa, Arda Turan, Koke and Diego Godin into indomitable players and he will have his hands full trying to keep them in the summer.

Nevertheless, it has been a good season and wherever he coaches, I hope he continues his good streak in the upcoming seasons.

Moment of the year Arsene Wenger lifting the FA Cup 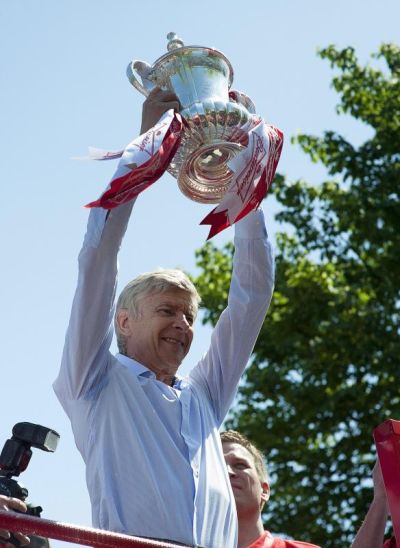 Two-nil down and many thought it was over for Arsenal. For one, even I thought it was going to be a herculean task to reduce the deficit. One man though, had other ideas.

When Santi Cazorla scored the first goal for Arsenal in the first-half, we thought we could make a comeback and Arsene Wenger, rather than bollocking his players, he would have given an inspirational 15-minute speech to his lads.

Come second half, Arsenal looked different. They were dominant, created chances and the players had extra springs in their boots. Laurent Koscielny’s goal brought the game into extra-time and many were looking at the prospect of penalty-kicks.

But Arsenal was in their element. They continued their second-half form and totally dominated Hull City in the extra minutes of the game. Their hard work paid off when Aaron Ramsey, who has been sensational this season even though hampered with injuries, scored the winning goal to bring the cup to Emirates.

I teared and told myself - After nine years, we’ve won a title! What a feeling! All the players were ecstatic but one man certainly earned the players respect. After the final whistle, the players jumped on Wenger and dedicated the victory to him.

Seeing him hoisting the cup is a poignant moment! Arsenal fans will surely hope to see more trophies coming from him in the near future.