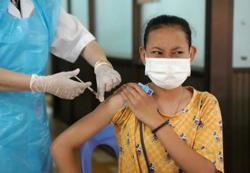 The approval of a new vaccine in Malaysia recently against the HPV has been welcomed but raises some concerns among the public.

I recently heard on the news there is a new vaccine that protects children from HPV. What exactly is this vaccine?

I have two children. My daughter is 15 and had an HPV vaccine in school at the age of 13. What is the difference between this vaccine and the one before? Does she need another one?

I also have a son who is 12 years old. The school says there is no need for boys to be vaccinated. Is that true?

I am sorry to put you on the spot, but is it too early to give the children vaccine against sexually-transmitted infections?

Wouldn't this encourage children to have sex earlier?

HPV or Human Papillomavirus is a common virus that is transmissible through direct skin-to-skin contacts.

There are more than 150 subtypes of HPV viruses, and nearly 40 are known to be transmissible by sexual contacts.

Therefore the virus is often considered the most common form of sexually transmitted infection, and nearly all sexually active men and women would get the virus at some point in their lives.

For most cases of HPV transmissions, there is no identifiable symptom.

However, for certain strains such as HPV6 and 11, the infections may result in the emergence of genital warts.

In more serious cases, the transmissions of HPV 16 and 18 are also linked to 70% of cervical cancers globally.

In addition, scientists have associated other cancers such as penis, anus, mouth and throat with many strains of HPV infections.

Since the association of HPV infection with cancers has been identified in 1982, scientists have been working hard to create a vaccine that can prevent the transmission of the virus in the first place.

The first HPV vaccines became available in 2006 against the crucial HPV subtypes 6, 11, 16 and 18, providing protection of up to 70% of cervical cancers and genital warts.

For the last decade, the World Health Organization (WHO) has put the vaccine on the list of essential medicine and recommends routine vaccinations for girls in countries that can afford them.

In Malaysia, the Health Ministry has provided the vaccines for 13-year-old schoolgirls attending government schools.

Parents have the option to opt out of the vaccination programme, but the take up rate in Malaysia is reported to be impressive at nearly 95%.

Although the vaccines have been shown to provide protection for boys from genital warts, certain cancers and even the potential of generating herd immunity for the future, the vaccination programme for boys is routine only in a handful of countries.

In most countries, parents have to make a decision to vaccinate their sons out of their own pockets.

Although the quadravalent vaccine that has been available in the last decade provides 70% protection against cervical cancers, many researchers still do not consider the coverage to be adequate.

The development of the new vaccine that prevents the transmission of nine types of HPV was approved by the US FDA in 2014, and has been shown to be successful.

The additional protection against HPV 31, 33, 45, 52 and 58 have also been demonstrated to prevent up to 90% of the cancers, and this has generated excitement among physicians advocating the vaccinations.

The approval of the new vaccine in Malaysia recently has been welcomed by many clinicians and at the same time, raised some concerns among the public.

The additional protection from the other five strains of HPV will mean the new generation of young girls will receive more robust protection against the deadly cervical cancer.

However, those who have been vaccinated with the quadrivalent vaccine previously will have to undergo the vaccination programme from scratch as soon as possible, preferably before sexual contact.

There are concerns that providing a vaccine that prevents sexually transmitted infection to youngsters will generate a culture of early sexual maturity and promiscuity.

Anecdotal reports have shown that in many communities, the onset of sexual activities is as young as early teens.

Therefore, the education and the protection of the younger generation have to start early, whether we like it or not!

Though Dr G is put on the spot over his view on this new nine-valent vaccine, he is excited with the potential of the eradication of cervical cancer.

The only way we can get there is approaching the taboo subject of sexual health with an open mind. On that note, wishing all Malaysians “Happy CNY!”