Getting fit for Malaysia

I USED to be able to run pretty fast. Eight and a half minutes for 2.4km. That’s about 85 seconds per lap around a 400m track for six laps. This was 25 years and 10kg ago. Then, like many of my friends, I went to university, stopped exercising as regularly, put on some weight, graduated, got a highly stressful job, stopped exercising, saw my metabolic rate slow down, ate too much to compensate for the long hours of work, and grew heavy and lazy. How heavy, you may ask? I tipped the scales at slightly over 90kg in the photo below, taken in 2004, just before I left for my PhD in the United States. At the height of my unfitness, I struggled to finish the same six laps in 13 minutes. When I realized that my weight and lack of fitness was affecting not just my physical but my mental health as well, I decided to take drastic action. A strict diet followed by one and sometimes two runs a day of at least 5km. It was easier to make this lifestyle change as a graduate student with some flexibility in my schedule. I managed to go down to 73kg (2nd photo below) and could run 6 laps at just over 9 minutes. 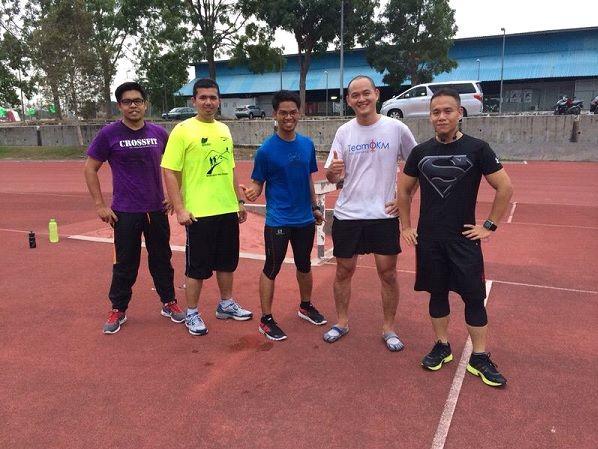 Since being elected into office, I’ve been very aware that the stress and responsibilities of my office could easily lead my back into an unhealthy lifestyle. Too many kenduris, Chinese dinners, open houses, Hari Raya jamuans, temple celebrations and too little time for exercise and I could easily balloon back up.

Hence, my decision to insert into my schedule, regular opportunities to exercise. I participate in a running event at least once a month. These runs usually take place early on a Sunday morning so they don’t interfere with my constituency events. On Saturday mornings, I will go for a 10km run in the Bukit Tunku area. During the week, I try to get in two rounds of exercise. My running shoes and change of clothes are in my car boot together with my basketball. Sometimes, it may be a game of 3-on-3 in the basketball court just outside my service center. Sometimes, it would be a few laps around the UPM track or the track in Bandar Baru Bangi Section 15. Or a short workout in the gym at the Royal Lake Club or short run at Taman Tasik Perdana. I’ve been for a few hash runs in Bukit Serdang and in the Ayer Hitam Forest Reserve. I’ve been to and am familiar with most of the nice parks for running in and around KL including Bukit Kiara, Taman Tun, Bukit Jalil, Taman Tasik Permaisuri, Desa ParkCity and also Lake Valley and Taman Tasik Cempaka in my own constituency.

I exercise to keep fit, to stave off the effects of aging for as long as I can, to release stress, to hang out with fellow runners, to clear my head and to remind myself to control my food intake. I never want to go back to my days of a sedentary lifestyle being chained to an office in front of the computer for long hours. Exercise makes me work more efficiently and helps keep my head straight.

In view of this, I was really pleased when the Minister of Youth and Sports, Khairy Jamaluddin, launched the #FitMalaysia campaign on twitter. The call to post pictures of you and your friends exercising on twitter as a way to promote a healthy lifestyle took on a momentum of its own. I was especially encouraged by the many photos posted by people who have lost weight as a result of adopting a healthier lifestyle. I can empathize.

This goes beyond partisan politics. Obesity and the related health problems such as diabetes and high blood pressure affect everyone regardless of age, gender, race, religion, language or political affiliation. The #FitMalaysia campaign will benefit all Malaysians.

This is my own personal wish on this Merdeka Day – that we can unite together through different forms of exercise. I’ll play my own small part by joining the fit.my campaign which will be launched on the 7th of September at Dataran Merdeka. I’ll be running 15km at the Team Malaysia fan run on the same day in support of our athletes who will be heading to Incheon, Korea for the upcoming Asian Games. So, wherever you will be, put down your iPhone or your iPad, stop watching TV or playing computer games, grab your sport shoes, go out with your friends and let’s get build a #FitMalaysia together!