The politics of FIFA's Golden Ball

Images of Ronaldo (left) and Messi reflected on the surface of the FIFA Ballon d'Or trophy. - AFP

THERE is really a lot of politics involved when it comes to voting for FIFA's Ballon d'Or - the best football player in the world.

The likes of Lionel Messi and eventual 2014 winner Cristiano Ronaldo did not vote for each other for the year's award, or for the year before that. 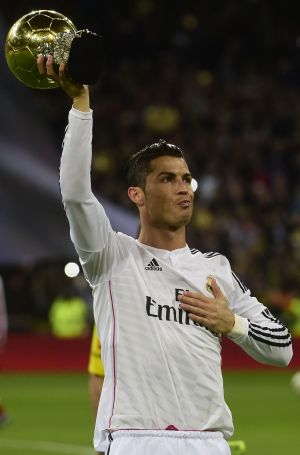 Both had the right to vote as captains of the respective national teams, but did they not consider the other as worthy for the title of best player in the world - or at the very least - the second- or third-best players?

Besides Bale, does he really think that Ramos and Benzema are that good? I mean they are pretty decent players, but were they the best-performing players the previous year? I have my doubts about that.

In 2013, Messi voted for Iniesta, Xavi and Neymar, while Ronaldo voted for Radamel Falcao, Bale and Mesuit Ozil.

The Messi-Ronaldo rivalry seems to go beyond the pitch as well. Why did they not acknowledge each other as great players?

Ronaldo in several interviews has said that Messi motivates him to do better and that he probably has the same effect on the Argentinian.

As expected, the coaches of Argentina and Portugal voted for their countrymen as the top players in the world - and not their captain's rival.

Zlatan Ibrahimovic's pick was interesting - Messi, Manuel Neuer and Ronaldo respectively. He certainly doesn't like Messi because of their differences while he was with Barcelona, but it looks like he really rates him as a player.

Brazilian captain Neymar chose Messi ahead of Ronaldo  and Mascherano, while Italian captain Gianluigi Buffon picked Ronaldo ahead of Messi and Neuer.

As expected, German captain Bastian Schweinsteiger picked only his countrymen – Neuer, Lahm and Thomas Mueller. All of them were part of the German machine that picked up the World Cup in Brazil.

But the World Cup teams play only seven matches at the maximum, and most people would judge the best player by performances for their club.

It doesn't help that the German league isn't as popular as the Spanish or English leagues.

So who did our Malaysian captain and coach vote for? No one – their names were not on the list for some reason, although all our neighbours voted for the best player award.

Malaysia's only vote came from journalist Rizal Hashim in the media section. He chose Lahm ahead of Neuer and Ronaldo.

For me, Atletico Madrid deserves a name in there for winning the Spanish league and reaching the Champions League final, with Diego Costa and Diego Godin playing integral parts.

I would also nominate a certain Luis Suarez, although I suspect there will be lots of people who would not agree.