PETALING JAYA: Families often share news of a loved one’s death through an obituary in the newspaper. For some, loved ones include their furry family members – pets.

Some people love their pets so much that the death of a pet is as difficult to come to terms with as the passing of a loved one.

When Snow Angel, an 11-year-old mutt that was rescued from the streets as a puppy, passed away suddenly in March from suspected heart failure, her family was devastated.

“It was not easy to put up the (obituary) ad, but I knew that I had to do it. She was like family to us,” said Snow Angel’s 52-year-old owner, who requested not to be named.

"It was not (really) an obituary, but a message. It appeared on The Star on her 11th week death anniversary.

“I did 30 to 40 drafts of the ad, I wanted to get the colour, font, and words perfect. It took me a good month and a half to complete,” he said. 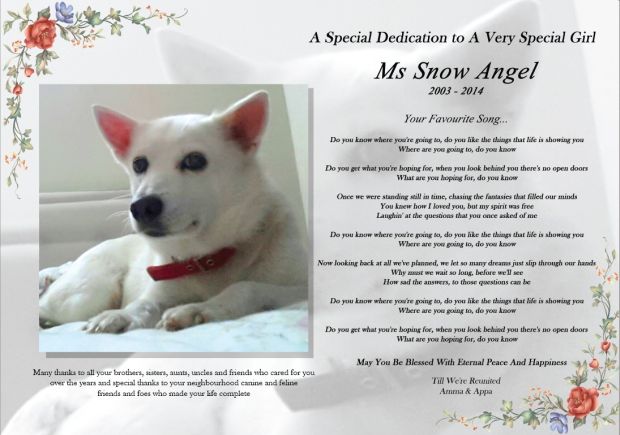 Snow Angel’s obituary read: “Many thanks to all your brother, sisters, aunts, uncles and friends who cared for you over the years and special thanks to your neighbourhood canine and feline friends and foes who made your life complete.”

The words of Snow Angel's favourite song, Diana Ross’ Do You Know Where You’re Going To, were also written in her obituary.

“After our evening walks, I used to sing the song to her and she would get all attentive and listen to me sing,” he said.

Life is “not the same without her”, he added, and he and his wife still keep photos of her in their Section 17 home in Petaling Jaya.

“I keep feeling that we did not do enough for her. But I hope that wherever she is, she is happy,” said the human resource and administration manager.

He recalls rescuing Snow Angel in 2003 at a restaurant across from his office in Cheras.

“My friends and I were having lunch there when she walked up to us trying to get some food, she was about three-months old then,” he said.

“I gave her some bones and meat, and I took a liking to her. I remember the waiters trying to get rid of her. They brought out their broomsticks and started beating her to chase her away.

“So I whistled at her, and she followed me back to the office and I took her home after work,” he recalled.

He said that it was almost like “love at first sight” but his wife told him to reconsider taking her in due to the heavy responsibility.

“I actually called up my friend and passed him Snow Angel. But two weeks later, I called him back and told him that I wanted to keep her,” he said.

“There was a connection from even back then, and she became an equal member of the family and even shared our bed with us,” he said.

However, he admits that he and his wife spoilt Snow Angel, and treated her like their own child.

“She took over the sofa, and even insists on having her meals on the sofa. We also took her on her daily morning and evening walks, and my wife took her for drives every night,” he said.

“We would even buy her chicken rice or KFC chicken for dinner. I suppose we spoilt her,” he laughed.

He said that his loyal dog “took care of us as much as we took care of her” and that he would cherish all the times they spent together.

Snow Angel’s owner is still mourning her death, and says that he probably would not be getting another pet anytime soon.

Would you put up an obituary for your pet? Share your thoughts in the comment section below.