The life of a pampered pet

Nike enjoys being the centre of attention

A DAILY Mail article about a television documentary on the world’s most pampered pets really made me reconsider what pampering can be.

Before reading that amusing article, I always thought that pampering your pet ended at yummy food and very attentive pet owners. But I was wrong. Very wrong.

Imagine taking your little pooch with you for yoga lessons, or dressing your duck up for catwalk shows, or spending over £20,000 (RM103,377) to throw your dog a pet wedding!

And I thought that my cousin having to spoon-feed her dog dinner was bad… her dog won’t eat his food unless someone spoon-feeds him!

To be fair, pets are like an extension of our family and we all pamper them to various extents. But seriously, a £20,000 pet wedding?! I just can’t get over that.

That is why I set out to find out just how many of my friends pamper their furry family members and to what extent they are being pampered. My friend Jenn's 10-month-old kitten.
My boyfriend was one of the first people I talked to in regards to the topic of pampered pets, because he and his mum are guilty of it.

“My cats are pampered, and I know it,” he said.

He explains that this was not always the case. It all started when one of his cats, Nike, was diagnosed with ‘hormonal stress’ when he started losing fur.

“The vet told us that the likely cause of the stress was due to him feeling neglected,” he said.

“This was because Nike had to compete with my other three cats for affection. So the vet suggested that we give him extra attention to make him feel special,” he added.

Unfortunately, his need to feel ‘special’ never stopped. He said that once the two older cats passed away, Nike assumed control of the house. 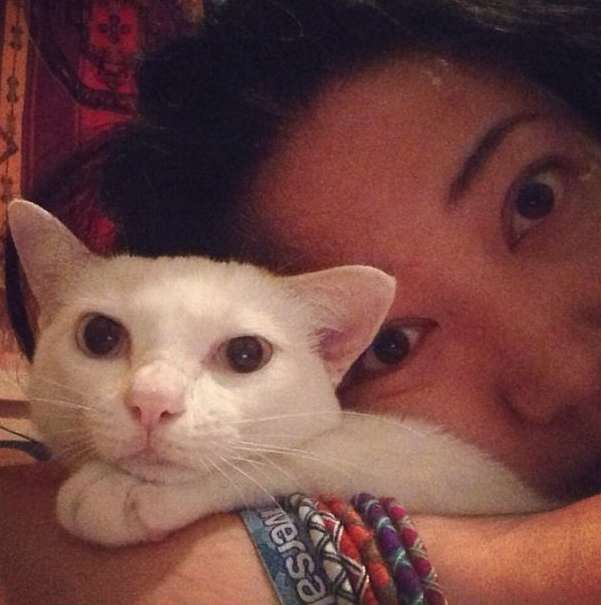 My friend Jenn and her kitten.

“As a result, our home-life revolves around him. He needs to be fed twice a day at fixed times, including free access to kibble throughout the day. If we do not follow his schedule, he will meow incessantly and make a general nuisance of himself,” he said.

He also adds that Nike “demands” to be given treats. Ranging from two to six treats a day.

“However, if he’s really angry, he pees on the furniture. But when he’s happy, he’s a very good cat,” he says.

“Nike is an extremely affectionate cat and would always snuggle up to you as you watch telly, read the newspaper, or anywhere really.”

I have met my boyfriend’s two cats several times; I can see how much they love their human family. But I can also tell you that Nike can be quite a diva and is very pampered. His other cat Bruno is much more docile in comparison. 
I also had a chat with my friend Zhungyi who told me that his family pampers his pets with delicious food.

His parents were in England and this was before he was born, he said that his mom would feed half the blue cheese to his dad and the other half to the cat.

The cat has since passed away, but now they have four Golden Retrievers and two Persian cats.

“One of them (his Persian cats) only eats cooked chicken. So my mom has to buy chicken breast for him. She would cook it and shred it by hand,” he told me.

“He wouldn’t eat his kibble or canned food,” he added.

“My mom feeds the other cat cream cheese in the morning. Like the Philadelphia cream cheese!” said Zhungyi. My cousin's dog Twinkle insists on being spoon-fed.


His dogs were equally as pampered as his cats.

“Every morning, my mom would cook a pack of frankfurter sausages for them. She chops them up and fries them in butter,” he said.

“At night when we put them in their cages, we still give them treats. They are all fully grown and I don't think they need treats anymore but my parents still give it to them,” he added.

Zhungyi also shares that he occasionally buys an extra-large packet of chicken rice for his dog’s dinner.

Another friend of mine named Sherwin said her dog can’t sleep in her room unless the air-conditioner has been turned on for at least half an hour (her dog doesn’t like sleeping in warm rooms).

“Before bed time she drinks Horlicks and has two biscuits to go with it,” she added.

I also learnt that her dog really likes ice cream.

“Oh, and her dinner needs to be served at the same time our family dinner is served. She doesn't like to eat alone,” she added.

Jenn, another friend of mine, said that her adopted kitten is like her baby.

“I can’t imagine life without her. I love her so much,” she says.

“Every time when I’m away from her, I miss her and I want to go home to be with her,” adds Jenn.

She tells me that her kitten sleeps with her every night and would often ask to be stroked.

But whoever spends £20,000 for their pet’s “wedding” has one really spoilt pet. By the way, the dog and her “husband” have since divorced!