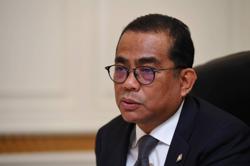 In a Facebook post, Ramasamy tried to clarify that it was not up to the Pakatan Harapan government of Dr Mahathir to have decided against the appeal on the grounds that they had no chance whatsoever.

He is attempting to divert all responsibility to Dr Mahathir. However, his remarks score an own goal as they reflect the incompetence and lack of political and administrative power of DAP’s former ministers within the Pakatan Cabinet.

If Ramasamy’s remarks do not confirm the inadequacies of the six DAP ministers namely Lim Guan Eng, Anthony Loke Siew Fook, M. Kulasegaran, Yeo Bee Yin, Gobind Singh and Teresa Kok in upholding Pulau Batu Puteh’s sovereignty, they only suggest these six were in deep slumber in the Cabinet, despite their mighty remuneration.

One can’t help but wonder if PM7 Dr Mahathir made this unilateral decision!

While Ramasamy’s remarks attempt to divert blame from DAP, he is advised to not use this crass method as the party cannot evade responsibility.

In fact, responsibility for losing Pulau Batu Puteh does not rest solely on Dr Mahathir; the entire former Pakatan government is equally accountable.

On Feb 2, 2017, Malaysia under the Barisan Nasional government filed an application for revision of the judgment rendered by the International Court of Justice on May 23, 2008 on Pulau Batu Puteh.

However, on May 28, 2018, it was the Pakatan government which decided to withdraw this review application.

This withdrawal by the Pakatan government caused Malaysia to lose our right to claim Pulau Batu Puteh.

Pakatan’s decision to drop the territorial claim is exactly identical to the cabotage exemption approved by DAP’s then transport minister Anthony Loke for foreign-registered vessels to perform undersea cable maintenance in Malaysian waters.

Both these decisions disregard the importance of upholding national sovereignty.

Removing the requirement that foreign-registered vessels apply for a Domestic Shipping Licence (DSL) before entering Malaysian waters to repair undersea cables, sacrificing the sovereignty of our nation and the safety of our citizens' data, are akin to derhaka (treason)!