Tribute to a Victoria Institution icon 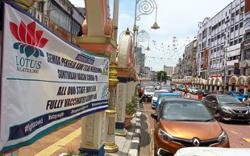 IT was deeply shocking and saddening to learn of the demise of my very good friend and Victoria Institution (VI) colleague T. Thiruchelvam, who left us suddenly on Sept 10, 2021, following a stroke.

Teachers and students of VI, Kuala Lumpur, past and present, especially batches from the 1980s to 1990s, would recall “Cikgu Thiru”, I’m sure.

He was indeed a very proud Victorian and had done much for his beloved alma mater. In his quiet and unassuming way, Thiru helped to perpetuate VI as a very special and elite institution. He was a true Victorian that everyone who has an association with VI should aspire to emulate.

He was not only a strong father figure to his own children but to all his students who were privileged to be taught by him.

In memory of Thiru, let me encapsulate some of what he accomplished for the school.

> The VI Museum that easily occupies three classrooms on the ground floor of the school.

> The school magazine, The Victorian, for which he was teacher adviser over the years that he was at VI until his retirement. I had the privilege of accompanying Thiru in his old faithful, his Volvo 121, to Kok Printers to see to the final publication of each instalment of the magazine.

> On the field, Thiru was a qualified MAAU (Malaysian Amateur Athletics Union) coach specialising in hurdles. He was recognised for bringing up both the school's and the state's athletes to compete successfully at school and state levels. He was also known as the man behind the opening and closing ceremonies on the VI Sports Day – what protocol to follow and how the events should be ceremoniously conducted, ending with the last post by the bugler standing at the top of the pavilion.

> Thiru also put in a lot of hard work to help me organise the Centenary of VI with the VI Cadet Corps Band to commemorate the historic event with a tattoo in the VI quadrangle followed by a special concert in City Hall for the residents of Kuala Lumpur. We even managed to produce souvenir programme booklets for both events – Thiru helped to select the relevant photos to feature in them. To this day, I have kept these booklets in my archives.

Finally, let me put on record that Thiru kept me company when I had to return to Malaysia from Australia after I was unsuccessful in my optional retirement bid and had to serve at VI for two years to end my teaching career as the head of the English Department. Thiru was there to give me plenty of emotional support and would come to my place to cook his Indian-style fish curry for me and my nephew, who was staying with me at that time.

I could keep going to describe many other events that brought us to work and bond together with students and staff, principally events that celebrated this great institution. However, I reckon I am happy to be able to contribute at least some of these wonderful memories as a tribute to my dear and well-loved friend and VI colleague.

We have all lost a VI icon who, with humble and unassuming ways, burnished the fame and glory of the Victoria Institution.

Sadly, also on Sept 10, another former VI teacher died. Christopher Lai Chee Keong taught arts, swimming and taekwondo from 1981 to 1990; he died from a lung infection.