Pragmatic, effective measures will see us winning the fight against Covid-19 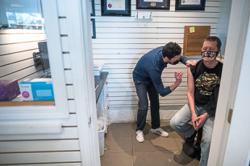 We have all heard the axiom that it is unwise to change horses midstream, yet it appears that some career politicians in Malaysia are pinning their ambitions on proving their lack of wisdom with this particular strategy.

Even as the government has successfully reduced the R0 value of Covid-19’s infection rate in Malaysia to 0.97 and provided a first round of vaccination to a greater percentage of the population than any country in the region (with an expected 300, 000 vaccinations to be carried out per day by August); opposition parties are still clamouring to unseat the government.

Prime Minister Tan Sri Muhyiddin Yassin recently announced plans for a Social Protection Database that will enhance and expand existing safety net measures for the most vulnerable Malaysians; something no previous government has attempted - including Pakatan Harapan - of which some of the remnants are now seeking to override the popular will and replace the current administration.

We are in the middle of a national crisis and the Perikatan Nasional government has been masterfully navigating every challenge as they arise.

No one would claim that it has been smooth sailing as we have been battered by the Fujiwhara effect of the pandemic colliding with the economic storms of the movement control order and the global downturn, just like every other country.

But amidst these multiple, unparalleled catastrophes, Muhyiddin’s leadership has been steady, responsive, and compassionate. The government has neither exploited lockdowns to silence opposition nor to impose harsh austerity measures, as we have seen elsewhere.

Quite the contrary, the Prime Minister has endured relentless attacks by political opponents even as he has released more financial aid to the public than any regional counterpart.

It is no wonder that despite organised efforts on social media to deride the government, Tan Sri Muhyiddin continues to enjoy majority support among Malaysian citizens, and the respect of world leaders.

We are leading Asean in vaccinations and will likely be the first in the region to achieve herd immunity. Our people have persevered through every incarnation of the MCO with abundant support from the government. And our most needy and vulnerable citizens are provided unprecedented protections that will further advance the Prime Minister’s vision of “Shared Prosperity”.

By any metric, the Perikatan government has acquitted itself remarkably well. Vying for leadership and position during a crisis instead of standing in solidarity with the people and the government does not indicate sincere concern for the national interest.

Lives have been saved under this government, and countless more will be. Thanks to of Muhyiddin’s pragmatic and effective steering of our nation, we are well on our way to overcoming the pandemic and setting our economy back on course towards even greater growth and development.

History will salute those who stand together with the rakyat and their leader during these tumultuous times, and those who sought to use this crisis to pursue personal ambitions will only be mentioned with an asterisk.