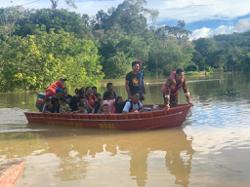 I REFER to the public criticism and many snide remarks made following the government’s announcement of the work-from-home directive for areas under the conditional movement control order (MCO), especially in the Klang Valley.

I am not sure what the critics are getting at. Do they want the economy to close again like during the first phase of the MCO? Do they have any inkling how much that would hurt the country and the rakyat?

During those few months, lots of businesses were practically crippled. Do critics know how many daily wage earners went to bed with a hungry stomach every day – and not just them but their families, including young ones, too? Can they put themselves in the shoes of those who lost their jobs, some possibly facing a lack of gainful employment in the foreseeable future due to their age, skillsets and scarcity of work in a shrinking economy?

Please have a heart! There is a need to balance lives and livelihoods. What’s the big deal about slashing the number of people physically going to work? For example, if a retail outlet can do with sales staff and some technical support to be around, the rest, like administration or human resources personnel, need only spend minimal time at work, if at all.

The whole idea is to break the chain of transmission. The fewer people moving around, the lower the risk of transmission. Allow only critical staff to be at work in offices and businesses, and ensure they adhere strictly to the SOPs.

While armchair critics can poke fun at whether a person needs to be sawed in half if a company strictly follows the 10% attendance rate for a workforce of five, this is no joking matter for those staring at fast depleting savings, if there’s anything left at all.

Businesses are hit hard and this spills over into the job market. The government is doing its best to stop the economy from going into a tailspin.

As it is, the government already has its hands full battling the pandemic. Despite the staggering figures, we appear to be winning, as the R0 infection rate dips and the MCO begins to bear some results (“R0 reduced from 2.2 to 1.5”, The Star, Oct 19; online at bit.ly/star_rate).

(The R0 – pronounced R-naught – is a measure of infectivity; an R0 of 10, for example, means a person who has the disease will transmit it to an average of 10 other people.)

During such an unprecedented crisis, let’s set aside our differences and focus on the bigger picture. We are walking a thin line between lives and livelihood. The last thing we need is for some to throw a hissy fit that can distract us from our efforts and plunge us into economic and public health ruination.