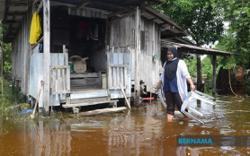 THE Kelantan state government is embarking on another crusade to make the traditional performing arts syariah-compliant. Moving on from wayang kulit and Mak Yong, it is now focusing on Main Puteri, “Kelantan to assess syariah compliance of Main Puteri shows” (The Star, Aug 12).

According to state executive council member Major (R) Datuk Md Anizam Abdul Rahman, a study would be conducted to determine the un-Islamic elements present in Main Puteri, an ancient healing ceremony that uses elements of Mak Yong music, movements and repertoire. While the Mak Yong performance relates a story, such as Dewa Muda or Bongsu Sakti, with actors and actresses playing the roles supported by an all-female chorus called Jong Dong Dang, Main Puteri has only two main performers, Tok Minduk and Tok Putri, besides the musicians and patients.

Tok Minduk is the rebab player who guides Tok Putri, the healer, who acts out while in an altered state the various character roles in the “diagnostic process” to determine the mainly psychosomatic illness.

Admittedly, there are animistic elements in this healing ceremony, considering that it was incepted at a time when animism was part of the belief system.

But through time, these non-Islamic elements have lost their significance and become merely adornments that add to the mystical ambience of the healing ceremony.

In fact, this healing ceremony has a scientific basis, as shown by extensive research undertaken by the Performing Arts Department of Universiti Sains Malaysia. The researchers examined it within the context of clinical medicine, especially the neurological aspects that deal with non-invasive stimulation of the brain.

Elements of Main Puteri that stimulate the brain are the music (sonic orders), movements (kinetic energy) and the mantra (auto-suggestion and sound stimulus).

The music (sound vibrations) activates the brain to elicit various emotional states that in turn causes it to release endocrine, dopamine, opioid and serotonin, which act as pain killers, relieve stress and relax the muscles. The mantra acts as an auto-suggestion to the patient, assuring him/her of being cured of his/her ailments.

Thus, Main Puteri has scientific basis, but it is couched in traditional mystical parlance.

Together with herbal pharmacological and tactile healing, Main Puteri was the mainstay of healthcare before the advent of modern clinical medicine.

As modern medicine became more accessible, Main Puteri lost its appeal among the younger and educated generations, leaving only the older people to keep it alive and relevant.

Nevertheless, it is an important part of our heritage and should be preserved as a historical and anthropological reference to the early forms of healthcare. Making it syariah-compliant would affect its original configuration.

In fact, Main Puteri does not pose any threat to the sanctity of Islam, and there are more pressing problems such as drug abuse, pornography and poverty in Kelantan that need the immediate attention of the government.

Instead of attempting to adulterate the traditional performing arts, we should preserve and promote them in their original form as our cultural heritage.MOHAMED GHOUSE NASURUDDIN