The canopy walkway in Taman Negara. In the time of the pandemic, tourists are looking for meaningful activities and experiences. — Tourism Malaysia

The Department of Statistics released the 2019 Domestic Tourism Survey yesterday (June 30, 2020), right on schedule as it always has, at the end of every June. The survey covers domestic tourism in totality and not in parts as often viewed in isolation by individual industries, sectors or players.

For example, retailers are focused on shopping, which is the biggest expenditure by domestic visitors, whereas hoteliers target tourists that stay overnight away from home, while restaurant, food outlet and stall operators look forward to more excursionists coming their way.

Shopping, automotive fuel, food and beverage, visited households and accommodation are the biggest five recipients in domestic tourism and accounted for 85.7% of all expenditure by domestic visitors that include tourists and excursionists on day trips, with most of them driving their own vehicles.

Less than 1% was spent on tour packages; of those, they were mainly nature or adventure tours with services provided or arranged at destinations by tour operators. Most domestic tourists that fly book their own flights and accommodation online, and use e-hailing service for local transport rather than use tour agencies nowadays.

The 2019 Domestic Tourism Survey reported there were 239.1 million visitors, 332.4 million trips and RM103.2bil was spent in expenditure. Naturally, these figures will drop this year because of the Covid-19 outbreak and the earlier stages of the movement control order (MCO) that discouraged Malaysians from travelling within the country. We are now in the recovery MCO stage and shopping malls have seen an increase in footfall, especially over weekends. Queues formed at retail outlets offering attractive promotional sales when customers lined up to sign in and have their temperatures checked before entering.

But many restaurants remain nearly empty and quiet as people have not switched back to the “old normal” when it was usual to dine in packed surroundings with little fear of communicable (or, for that matter, non-communicable) diseases.

And with businesses suffering from little or no income but saddled with high overheads such as rent and wages, many tourism enterprises will soon close if they haven’t already. Those that have taken loans hoping to tide themselves over the crisis period will continue to bleed and end up with more debt. Whether it is taxpayer’s money through government funding or banks compelled to provide risky loans, it will be throwing good money after bad. With the government’s coffers surely near empty, it would be better to cut further losses and conserve whatever cash is left for more productive use.

While those that have invested in properties such as hotels or tour buses are stuck with depreciating assets with poor market value, others could just bail out if they are only renting premises or vehicles for their operations and resume at the right time next year or thereafter. But many do not want to let go of their businesses after investing so much time and energy to build them up. Although many people naturally evolve with minor changes and adjustments, most cannot adapt to large changes and economic shocks or they are not bold enough to switch to a different field entirely for a new beginning.

In the United States, many of the oldest or biggest companies, including well-known brands, are closing or scaling down their business. The sooner they let go, the better the chances are they can rise from the ashes, as they could spend time planning instead of running around and putting out fires.

Those who want to cash in on domestic tourism will be successful if they can create something new and interesting to offer. But the majority will be dishing out more of the same, believing that more online advertising and promotions will reach out and attract customers. This may be true during the good times, when many jumped on the tourism bandwagon. But this is the time of the pandemic. Apart from looking at hygiene standards, safety and security, tourists are also looking for meaningful activities and experiences. 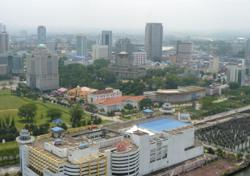 Proposal for three-tier fine system for not wearing masks