Just cause to celebrate 50th anniversary of Rukunegara

LEST Malaysians become despondent over the many challenges posed by the Covid-19 pandemic, it will be good to be reminded that in the past, the nation has faced and overcome many problems with unity, foresight and fortitude. Among these are the Emergency (1948-1960), Indonesian Confrontation (1963-1966) and the tragedy of May 13, 1969.

To ensure that we do not repeat this blight in our history, the Rukunegara was instituted on Aug 31, 1970, and because of it and other factors, there has not been a repeat of that level of racial conflict since then.

It has been 50 years since we introduced this national philosophy which is still very relevant today, and worth practising.

Its objectives were to forge greater unity, maintain a democratic way of life, create a just society, adopt a liberal approach to cultural traditions, and build a progressive society oriented to modern science and technology.

These objectives were premised on the five principles:

2. Loyalty to King and Country;

The Rukunegara was formulated to achieve a minimum consensus with regard to national aspirations among the diverse communities and to build a united Malaysian nation regardless of location or ethnic character.

Along with the Federal Constitution, the principles of the Rukunegara are important guides for nation-building, national unity, peace and harmony. Hence, news of Communications and Multimedia Minister Datuk Saifuddin Abdullah saying that the 50th anniversary of the Rukunegara will be commemorated in conjunction with our Merdeka Day celebrations later this year are very welcomed.

His announcement is timely for several reasons.

First, the principles of Rukunegara seem to have been lost somewhere in the transition from the 1970s into the 1980s and beyond. There was hardly any reference or call to adhere to its aims and principles in the affairs of the nation.

Second, we seem to have been preoccupied with issues that tended to obscure rather than celebrate our diversity.

Third, there were times when it seemed that we were in danger of losing our sense of fair play, of give-and-take, and of caring and sharing. We must rekindle the spirit of Rukunegara. Let’s put its principles in practice, especially among the younger generation. Although these are taught in schools, it will not serve much purpose if students only memorise but do not practise them.

Let us promote the Rukunegara aggressively to build a united and harmonious nation. We owe that much to ourselves and the next generations. 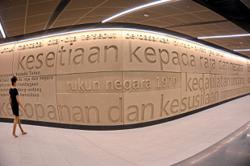 Live by principles of Rukunegara for unity