The Latheefa Koya I know

LATHEEFA Koya is no stranger to controversy. Her appointment to the chair of the MACC (Malaysian Anti-Corruption Commission) has come as a surprise to many, including myself.

However, I am more surprised by PM Tun Dr Mahathir Moha-mad’s unconventional move in appointing Latheefa to this position.

Although she was a card-carrying party member, Latheefa was more prominent in legal litigation and human rights activism. There’s no doubt she is very competent in both her legal knowledge and commitment to work. I believe she will not bend in the face of corrupters and abusers.

I have known Latheefa for years. She was among the earliest batch of young activists who joined the waves of the Reformasi movement.

Latheefa came into Parti Keadilan Rakyat through the merger of Parti Keadilan Nasional (PKN) and the left-leaning Parti Rakyat Malaysia (PRM). Members of PKN’s youth wing recognised Latheefa as a firebrand who had no reservations in punching back at any conservative or sexist remarks from her youth counterparts.

She was uncompromising in insisting that the progressive values of PRM be adopted by the newly merged Angkatan Muda Keadilan.

Throughout the years of the Reformasi struggle, this passionate young woman earned both reverence and dread among the members of the party’s youth wing.

Indeed, Latheefa has been a vocal party activist – she held posts including as youth leader, information chief, and central committee member. However, her heart was never in partisan politics.

Despite our long association since the early formative years of PKR, our working relationship in party activism was not always harmonious.

Latheefa adamantly refused to back down whenever she believed she was right. Often, our debates would burst into fierce arguments. She too admitted that her tenacious personality was not suited for partisan politics. Several times she was offered to contest in elections and she flatly refused each offer.

While Latheefa has been a committed party member, her real passion is, in fact, the law. She was among the most dedicated and dogged lawyers in Anwar’s (Datuk Seri Anwar Ibrahim, PKR president) defence team. However she did not mince her words whenever disagreements cropped up, even with Anwar.

At times, her criticism of party leaders could be very harsh, even acrid. Despite that, I know Anwar remains grateful and respectful of his obstinate critic.

Reformasi protesters all knew Latheefa as among the most active and hardworking of support lawyers in the last two turbulent decades. She was always among the first to emerge whenever there were arrests, detention or a crackdown by the authorities.

She worked tirelessly and most of the time without payment to defend activists as well as victims of abuses of power.

Without the sacrifices and relentless efforts of voluntary lawyers like Latheefa and her legal support team in those long oppressive years, it would have been impossible for protesters like me or other reformists to sustain our struggle.

And without that mass mobilisation, we would not have seen the birth of New Malaysia at the 14th General Election.

Let me return to the controversy of Latheefa’s appointment as MACC Chair. The dissenting voices to her appointment can be divided into two broad views.

Firstly, some people might question her background as a party member. They have valid reasons to be sceptical due to the extended period of politicisation of our government institutions.

There are questions about how a person with a strong background in a political party would be capable of making impartial decisions.

While mindful of such reservations from members of the public, the only response for Latheefa is to demonstrate her merit through executing MACC’s mission with impeccable integrity.

The public will only be convinced if Latheefa continues to exercise an independent mind and bows to no power in the course of her duty.

The only concern I have is whether her strong character might cause friction among colleagues, or a negative reaction from government officials.

But I hope that over time she will be able to develop a conciliatory and professional attitude when working with the civil service. Let’s give her time to prove her ability.

Secondly, there are people who criticise the appointment procedure as flawed. I believe many legal experts have clarified the issue.

As far as the legal and constitutional processes are concerned, the Prime Minister has fulfilled all requirements in the appointment.

The problem, it seems, came from the wording of Pakatan Harapan’s manifesto. Let us revisit the manifesto issued at GE14. “Promise #14: Reform the Malaysian Anti-Corruption Commission and strengthen anti-corruption efforts” was written as follows:

“MACC is the most important agency to fight corruption in Malaysia. Public trust in the MACC is of paramount importance.

“This enhancement will allow MACC to have its own powers and autonomy, including appointing its own officials, and receiving guaranteed financial allocations, protected by the Federal Constitution. The MACC will report directly to Parliament, rather than to the Prime Minister.

Pakatan promised to introduce quite a few reforms to empower the MACC. However, these reforms are mostly yet to be implemented. The current debate focuses on this line:

“Appointment of these commissioners must be validated democratically by Parliament”.

What this means is that the Pakatan government has to create a mechanism so that MACC can be given more fangs and also ALL commissioners must be validated by the Parliament.

A similar sentiment is expressed in “Promise #16: Restore the dignity of the Parliament:

“This will reduce the ability of the Prime Minister to intervene in these important appointments.

“Important bodies such as the Attorney-General’s Chambers, MACC, Bank Negara, the Securities Commission, and the National Audit Department shall be liable to be called by the appropriate parliamentary committee.”

As it says above: “Key appointments must be approved by a suitable parliamentary committee”. However, such a procedure is yet to be created legally.

The law must be amended to empower “a suitable parliamentary committee” to approve or validate the appointments of ALL these positions, such as the Human Rights Commission, Election Commission, MACC, etc.

There are some opinions, including from a handful of MPs, that the newly formed Special Select Committees should be tasked with the job of approving such appointments. I do not think that at present there are sufficient legal frameworks and guidelines to equip any of the committees to undertake such tasks.

Backbenchers and concerned parties still have a lot of work to do to upgrade various institutions.

The core spirit of the manifesto was in fact to confer incontrovertible legitimacy and standing to the anti-corruption institution. While certain individuals may have had misgivings about Latheefa in the past, attacking her personally is offensive and tantamount to undermining MACC and its function.

As Pakatan’s key promise is to build a corruption-free political system, the job of eradicating abuses is very challenging.

Anyone would be honoured to be given such an important and heavy responsibility. I am sure Latheefa must be proud and excited by the trust given to her by the PM.

I too feel proud that a person whom I have known for years, a fellow traveller in this struggle for reform, has been given this duty.

In the era of New Malaysia, many of us activists are trying to utilise our abilities and find our own niche in the new administration so that we can contribute to rebuild our beloved country.

I am glad that Latheefa has found her role, and that her role is to realise the people’s hope for a corruption-free society that we can all be proud of.

I wish her the best of luck. Her success will be our nation’s success. 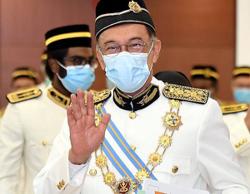 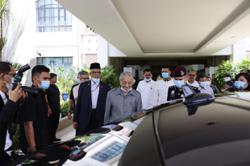 Dr M: Perikatan more guilty of politicking during the pandemic 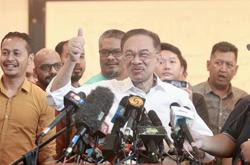