Start of the Ming voyages 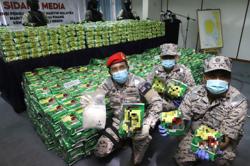 Chinese ships laden with precious silks and porcelain glide majestically at full mast up the Straits of Malacca as villagers watch in awe. Sampans hurriedly set off to welcome Emperor Yung-lo’s most recent envoy to the Malacca Sultanate. These were thevignettes of a romantic era, writes SUHAINI AZNAM.

JUST as China was reaching its peak as a world power, Malacca too was emerging as a port polity in insular South-East Asia. Both had common interests to ensure that the Straits of Malacca was not threatened by Siam and Java.

The congruence of interests in that time enabled Malacca to provide the maritime security upon which it could then expand, with China as its patron.

China, too, consolidated its power and reached far-flung regions in the Arab and African worlds. Six hundred years ago, both sides had an understanding of the region. It was no coincidence then that China sent a Muslim to head the great armadas that became known as the Ming voyages.

The Ming Dynasty (1368-1644) marked the height of China’s greatness in arts, literature and maritime diplomacy.

The period 1405–33 was a time of Asian ascendancy. The European colonialists had not yet arrived. In South-East Asia, the political geography divided the region between the Majapahit Empire (centred in Java) and the Srivijaya Empire (centred in Palembang and Jambi).

The eunuch admirals under the supreme command of Zheng He (also known as Cheng Ho in romanised transcription), made numerous expeditions in those three decades, traversing oceans and visiting ports as far away as Sri Lanka, Aden and the east African continent.

Lavish funding came from the state coffers, and was part of Emperor Yung-lo’s aim to show off China’s might to the smaller vassal states of South-East Asia as well as to trade with the Middle East.

The Ming voyages were the direct result of political shifts in China where the Prince of Yan, son of the founder of the Ming Dynasty, had initiated a rebellion against his nephew who had inherited the imperial throne in 1398.

“The Prince of Yan battled southward from present-day Beijing and captured the imperial capital of Nanking in July 1401,” wrote historian Dr Geoff Wade in his article Voyages of the Ming Admirals, which was published in the inaugural issue of Heritage Asia.

Upon victory, he assumed the title of Yung-lo (1402-24) and began a period of unprecedented expansion in the region.

Wade chronicles major attacks against the Mongols to the north, and the establishment of garrisons in southern Manchuria. Yung-lo invaded and temporarily incorporated Vietnam into the Ming state and sent military forces against Yunnan. He also launched the eunuch-led Ming voyages to flex China’s muscles beyond its maritime borders and to expand its trade links with far-flung nations.

For the smaller states of South-East Asia, he could promise the protection of the imperial throne. Vassal states sent him delegations of kings and envoys bearing tributes.

The formal China-Malacca link was consolidated in 1405 when the Ming emperor “assigned an engraved inscription to Melaka for the ‘mountain protecting the country’,” noted Wade.

This, he surmised, could have been a reference to Bukit Cina.

Admiral Zheng He himself stopped in Malacca at least five times during his seven voyages westward.

Historian Rosey Ma Wang described Zheng He as “an explorer, conqueror and trader”. He had at his disposal some 300 ocean-going vessels and a crew of 200,000 to 300,000 men, she noted in her article Chinese Muslims in Malaysia in Different Periods of History, published in the book Chinese Studies of the Malay World.

Historians concur that in his first imperial voyage slightly after 1405, about 28,000 men in at least 60 large vessels set sail southwards.

According to Chinese records, Malacca was a flourishing entrepot throughout the 15th century, with its people depending almost solely on trade. Most of its residents were Muslims who lived in attap houses on stilts. Those who could afford it rode in sedan chairs.

Zheng He himself was Muslim, originating from Yunan. As many of his crew were also Muslim, those who stayed back found it easy to assimilate into the local society, taking care of the granaries, warehouses and a stockade that Zheng He had built there.

They propagated the Muslim faith according to the Hanafi sect, using the Chinese language, and built some of the mosques which today stand as architectural monuments to their early presence in Malacca.

The Chinese, for their part, acknowledged Parameswara as Sultan of Malacca.

In 1411, Parameswara, his wife and an entourage of 540 sailed to the Chinese capital of Nanking where they were ceremoniously welcomed. They stayed for two months.

In the following year, Parameswara’s nephew led another delegation of 165 people to China. In 1413, another nephew bore tribute to the Chinese imperial court. The Journal of the Malaysian Branch of the Royal Asiatic Society also notes that Malacca had requested it be conferred the status of Old Port Territory but had been refused.

In 1414, Parameswara died and his son, Megat Iskandar Shah, came to the Chinese court to advise Yung-lo of this fact. A decade later, it was Parameswara’s grandson’s turn to bear tribute and inform the Ming court of his father’s death.

Much later, in 1467, Princess Hang Li Po set foot in Malacca and was presented to Sultan Mansur Shah as a bride. He built for her a palace on today’s Bukit Cina, where she lived and died. Historians have debated the authenticity of the princess’ pedigree but agree that a noble lady bearing that name had arrived and is probably ancestor to some of the old Chinese families of Malacca.

The Ming voyages continued until the death of Zheng He. Emperor Yung-lo himself died in 1424.

Internal troubles then forced the Chinese to drop their maritime activities. Thereafter, the ships that sailed between Malacca and China were trading vessels and their representatives were not received at court.

In 1511, the Portuguese captured Malacca, suspending for the next 500 years any direct contact between the governments of the two countries.

Related Story:Gallery in honour of a great voyager 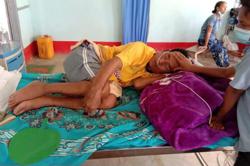