In the nick of time

AS was the case with Zimbabwe three months ago, a seemingly formidable and entrenched leader has been swept aside with relative ease. The tide, as it did with Robert Mugabe, swiftly turned against Jacob Zuma, and the final blow was executed by a dramatic shift of support within the aging president’s own party.

Zuma was not cut from the same cloth as his main predecessors as president of South Africa – the fatherly statesman that was Nelson Mandela, and the scholarly technocrat Thabo Mbeki.

In fact Zuma was a Trump-like figure for whom gaffes and boorish behaviour were only the tip of the iceberg. The man with six wives and over 20 children fought off rape charges in 2005 when he was vice president, and regularly fought off allegations of corruption and nepotism.

He has been linked to graft allegations for more than a decade, with his former financial patron Schabir Shaik going to jail for corruption and fraud in 2005. His close ties to the super wealthy Gupta family also led to accusations that they were able to influence Cabinet appointments. Indeed his resignation came within hours of a police raid on the family’s luxury home.

Under Zuma, South Africa, already reeling from the mass exodus of the white privileged classes who had benefited from the nation’s vast wealth during a near century of apartheid, was unable to build on its vast potential.

As a nation, it began to be known for its high rate of murder, rape, carjackings and kidnappings, and despite the walls of segregation coming down, a small percentage of the country lived in luxurious gated communities while millions of others battled to grab their share of the country’s undoubted riches.

After all, as the most industrialised country in the African continent, it still makes up for more than one-third of Africa’s GDP. 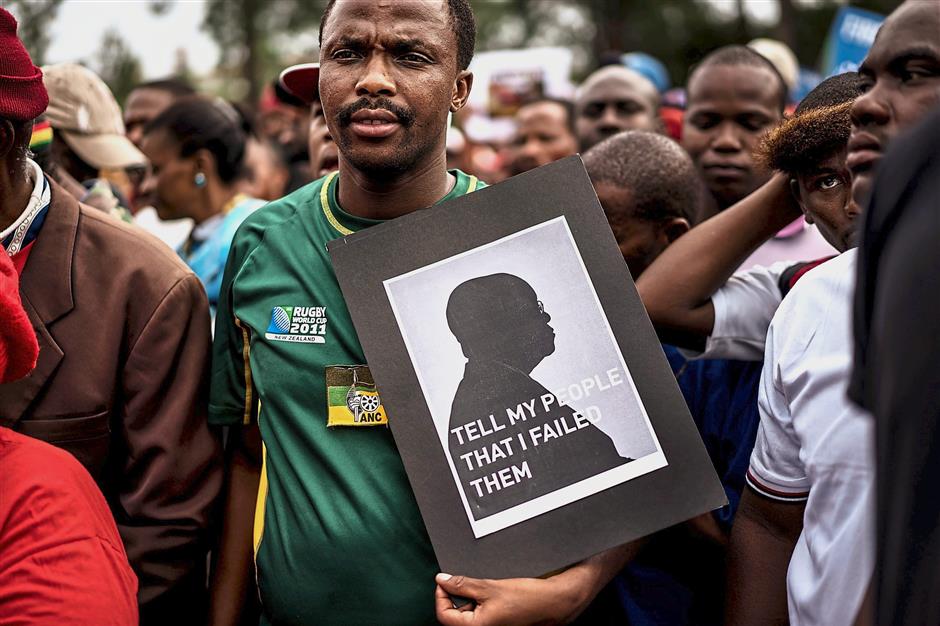 Under pressure: Many South Africans were happy when Zuma announced his immediate resignation in a TV address to the nation after the ruling ANC party threatened to eject him from office via a parliamentary vote of no confidence. — AFP

Still there are some who see Zuma’s peaceful ouster as a sign that South Africa’s institutions are vibrant and independent.

Former US Ambassador to South Africa Patrick Gaspard commented, “Three things led to the end of Jacob Zuma’s reign in South Africa: Fiercely independent journalism, robust civil society resistance that called government to account and public servants with integrity that had the courage to stand up to corruption.”

When a system has stagnated it usually means that the deposed ruler has surrounded himself with “yes” men. The new president Cyril Ramaphosa may be styling himself as a reformer but guess what? After getting his start as a defender of the working man as a leader of the National Union of Mineworkers, he went into business and is now one of the country’s richest men with a fortune estimated at over RM2bil. Does one of the largest beneficiaries of crony capitalism has what it takes to turn the South African ship around?

The main opposition Democratic Alliance has its support base but longtime leader and Premier of the Western Cape province Helen Zille was not able to provide a convincing national alternative.

The impact of her successor, the pastor Mmusi Maimane remains to be seen. To the left of Zuma’s ANC, there are the Economic Freedom Fighters, whose controversial leader Julius Malema was a one-time ANC Youth leader and Zuma favourite, who suddenly had enough of the president’s ways. Which is not to say that Malema is a squeaky clean candidate. He’s anything but.

So the real task for South Africa and the ANC is a mammoth one. How to do away with institutional corruption and a party that went from revolutionary underdogs to bloated fat cats? Well, in dismissing Zuma, the first step of a painful transition has begun.

News editor Martin Vengadesan grew up to the anti-apartheid rallying cry of Amandla Awethu and wonders if it still applies.